News: Melbourne surfers could ride 1.5-metre-high waves within a heated salt-water pool in plans set out by local firm Damian Rogers Architecture for the city's docklands.

Damian Rogers Architecture has collaborated with engineering giant Arup to conceive and propose the idea for Surf Park Docklands – a contained pool with that would filter in and heat salt water from Victoria Harbour in Melbourne, Australia. 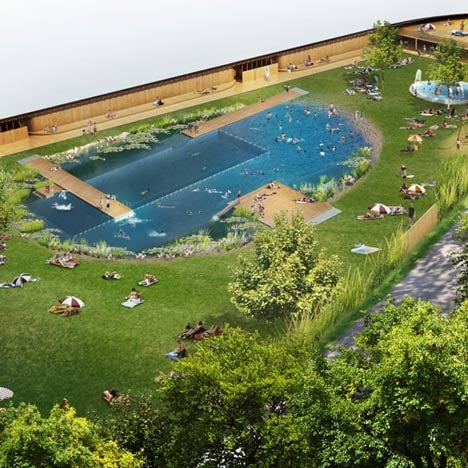 "The whole idea came from being able to surf in a city location," said Damian Rogers. "We think it brings another activity, another space into Melbourne."

The floating open-air facility would project from an existing dock and include a pool with artificially generated "surfable waves", an adjacent beach and a park area.

Visualisations of the proposals show a grass-covered roof curving over a building that would house changing facilities and retail units beside the sand.

A boardwalk traces the outline of the rectangular plot that would create an extension of Central Pier, located close to Melbourne's Etihad Stadium.

"It's an area that lots of people go to, but there's not always the experience, so we wanted to create something in the heart of the docklands that's a genuine place that people can go to and enjoy," said Phil Carter, urban and transport planner at Arup.

The team is looking into the possibility of creating different-sized waves – breaking perpendicular to the beach for 160 metres – that would facilitate both competitions and lessons for beginners.

With the nearest surfing beach up to half an hour's drive out of the city, the local water sports community hopes the project will encourage more involvement with the sport.

"To bring the surf to the city is a great concept, especially to a site like Central Pier in the Docklands," said Max Wells, chief executive officer at Surfing Victoria. "I can imagine having surfers in suits heading for an after-work session and kids coming to the Docklands carrying surfboards on Melbourne's trains and trams."

Construction is expected to cost $8 million AUD (£4.5 million) and the project needs approval from the city council before moving forward.

Natural swimming facilities have also been proposed for London's River Thames and New York's East River as part of a growing trend for bathing in untreated water. Herzog & de Meuron recently completed a biologically filtered pool in Switzerland, while a harbour-side recreation area was built in Denmark to encourage taking a dip in the sea.