Design Miami 2014: a wardrobe by Chinese designer Naihan Li shaped like OMA's CCTV tower in Beijing will go on show at Design Miami next month.

Naihan Li created the 1:100 scale model of the building, completed by Dutch architecture firm OMA in 2012 as the headquarters for the Chinese Central Television company, to function as a wardrobe and storage cabinet. 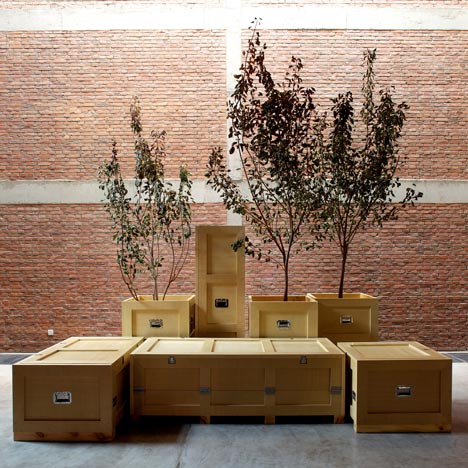 The Crates by Naihan Li

Built from Brazilian rosewood, the furniture piece echoes the landmark's distorted loop shape and is carved with the same pattern of grooves used across the building's facade.

Sections of the structure open up to reveal storage compartments, including drawers with dividers in the base and a long cupboard housed in one of the towers.

CCTV Wardrobe is the latest piece in Li's I Am A Monument furniture series, which includes a bookcase in the form of the United Nations building in New York and day bed shaped like The Pentagon – home of the United States Department of Defence.

"I Am A Monument takes landmarks and shrinks them down to something on a more personal scale, allowing for a reimagining of how we look at the world," said Li.

The series references a legend of a Han Dynasty emperor who had the entire landscape of China recreated in miniature with bonsai trees.

CCTV Wardrobe will be displayed by Beijing and Los Angeles-based Gallery All at the Design Miami exhibition, taking place from 3 to 7 December.

The installation will include an animation showing the cabinet rotating, opening and closing along with animated fog to represent "the billowing smog of Beijing's wintery landscape", according to a statement from the gallery.