Design duo Adam and Arthur has released a monochromatic cabinet with an undulating silhouette that references the common art motif of a mother next to her child.

The two-metre-high cupboard is the result of a collaboration between French marquetry artisan Arthur Seigneur and Australian industrial designer Adam Goodrum, who have been working together under the Adam and Arthur moniker since 2015.

The Mother and Child Cabinet is decorated using straw marquetry, a craft technique that involves forming patterns out of flattened ribbons of straw and embedding them into furniture.

In this case, 16,000 individual pieces of white straw were inlaid into the cupboard to give it a faceted pearlescent sheen, broken up by interspersing black bands.

The black stripes are also made of straw, dyed in-house by the designers.

The cabinet's two humps were designed to suggest the silhouette of a mother and child – a theme that is frequently seen in paintings and sculptures throughout history.

This reference is made more apparent when the cabinet is opened via its two sets of double doors, revealing semi-circular details on the interior that are reminiscent of the head and shoulders of two figures.

Straw is a versatile and ecologically "wonderful material", according to Adam and Arthur, that can be grown quickly and sustainably to be used as a biofuel, building material or decoration.

Turning the stalks into marquetry is technically challenging, the duo explained, and made more demanding in the case of the Mother and Child cabinet by the decision to use white straw as opposed to darker shades. 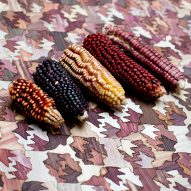 "The way straw is inlaid in marquetry transforms its curled stalks into an iridescent substrate, creating the opportunity to realise astonishing results," the designers said.

"It is a natural veneer that plays with light, allowing an endless possibility of pattern and colour."

The Mother and Child Cabinet is among five projects that have been shortlisted in the furniture design category of the 2022 Dezeen Awards.

Other products in the running include a table made entirely from volcanic stone by Mexican design studio Peca and a modular bed system made from recycled materials by Tim Rundle Studio.

The photography is by Andrew Curtis.