Design collective Vík Prjónsdóttir has launched two Icelandic wool blankets shaped to look like the wings of a swan and an eider duck as part of a range of avian-influenced covers.

Vík Prjónsdóttir's Swan and King Eider blankets, designed to be used as shoulder wraps or sofa throws, are the latest editions to the Wing Collection. 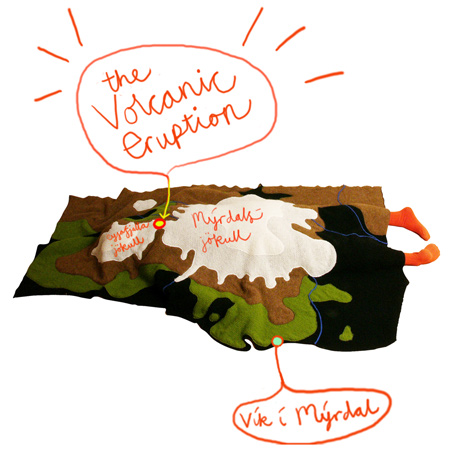 The Regional Blanket by Vík Prjónsdóttir

"The Wing is an adaptable small blanket to use as you choose," said the designers. "Designed to hang from the shoulders, you can slip your hands through its layered 'feathers' for comfort that won’t slip, or use it as a dramatic sofa or chair throw."

Known for interpreting folklore into unusual fashion and homeware products, Vík Prjónsdóttir has created the multipurpose range from 100 per cent double-knitted Icelandic wool with blanket-stitched ends.

Icelandic sheep evolved in complete isolation for over 1,000 years, resulting in wool with a unique combination of fibres. The inner fibres provide insulation and the outer fibres water resistance – resulting in lightweight, warm and water-repellent textiles.

The yarn comes from the only spinning mill in Iceland, where colours are custom-dyed for Vík Prjónsdóttir, and the blankets are constructed in a small knitting factory in Reykjavik.

"The idea came when we were working in the Westfjords in Iceland in this little house in a very isolated fjord, and above us in the mountain lived a pair of eagles," co-founder Brynhildur Pálsdóttir told Dezeen. "We could watch them fly above us, a very spectacular sight. We started to work on a blanket the same size as the wing span of the eagle which is two and half metres."

The first two colourful bird-inspired blankets in the collection, Raven and Papageno, were launched at Reykjavik's Design March event in 2012.

"The world of birds is one of dazzling variety and colour," said the designers. "They offer dreams of flight and freedom, exploration and escape."

The latest designs, Swan and King Eider, also reference the character and colour combinations of their namesakes.

"We selected birds that have a strong myth about them, they are strong characters and that is interesting when choosing a blanket to look at the character of the blanket, is it a protective blanket or more friendly blanket," Pálsdóttir told Dezeen.

"The Eider duck, with its distinctive shielded forehead, is the largest in the Northern Hemisphere. As a duck, it is often seen as a symbol of both freedom and resilience, able to take off at any moment, but also willing to endure the changing seasons without complaint."

Established by Brynhildur Pálsdóttir, Gudfinna Mjöll Magnúsdóttir and Thuríður Sigurþórsdóttir in 2005, Vík Prjónsdóttir aims to use creative design to regenerate the Icelandic wool industry, working with Glófi ehf – the largest knitwear producer and distributor in the mid-Atlantic country.

Photography is by Elisabet Davidsdottir.