A curving copper-clad extension punctuated by portholes has been added to a house in Ghent, Belgium, by local studio Atelier Vens Vanbelle, who describe the structure as "a cocktail of science fiction and nostalgia" (+ slideshow).

Atelier Vens Vanbelle designed the extension to accommodate an extra bedroom, bathroom and a new foyer area, which they placed alongside the existing property to minimise any disruption to the established spaces and family routines.

The original farmhouse building had been extended in the 1990s with an uncompromisingly modern curving glass wall. The architects incorporated into this their design, which aims to reinforce "the ambiguous character of the existing buildings".

The extension's rounded form gives it a maritime feel, which is accentuated by the domed portholes. 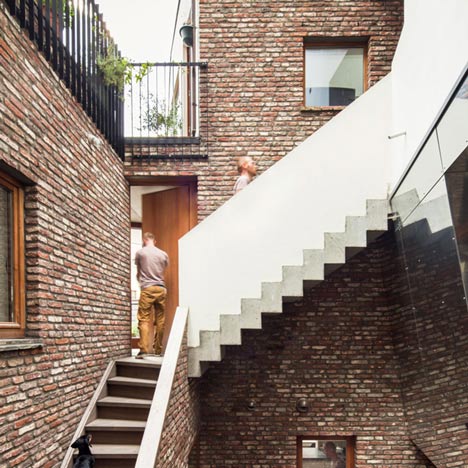 It is covered in a skin of copper panels and supported by a copper-clad wall with concave sections removed from either end.

"The new building volume seems to have landed or washed up on the site, as a sort of retro-futuristic capsule of which one cannot determine the origin," said the architects in a statement.

"This capsule does not refer to an era in architecture, but is reminiscent of the exploits of Jules Verne or the world that cartoonists Peeters and Schuiten recall so perfectly: a cocktail of science fiction and nostalgia."

An expansion of the curving glass wall incorporates a new entrance porch sheltered beneath the main volume of the extension, which is connected to the original interior by a lounge space at the top of the stairs.

A short set of steps leads from the lounge area to the bedroom, which culminates in a balcony that is enclosed by the curving edge of the copper wall.

At the opposite end of the bedroom is a bathroom that is entirely rendered in white polyester to give it the appearance of "a kind of cockpit".

Circular openings in the walls and ceiling allow natural light to brighten the interior, which features a curvaceous bathtub and shower area in the rounded end of the building.

The bedroom, bathroom and terrace occupy the entirety of the raised extension and create a self-contained unit, "like a suite in a (space)ship".

Rather than attempting to evoke the appearance of the traditional farmhouse, the architects focused on giving the extension its own character to emphasise the difference between the two structures.

"At first sight the result seems a little bit odd, but at the same time it is also very obvious," they said.

"It's quite difficult to place it into a particular style or category, which ensures this house will withstand the test of time."