The gaping hole in the centre of this office block in Paris was designed by MVRDV to preserve views of another local building (+ slideshow).

The Rotterdam-based architecture firm named the building Pushed Slab, after the way its volume has been "pushed until it breaks, then twisted and pushed to the south" to maintain a view to a nearby apartment building.

The new seven-storey structure is located on a former railway embankment in the 13th arrondissement of Paris. It is the first building of the city's proposed eco-quarter, so it has been designed to produce 90 megawatts of energy a year. 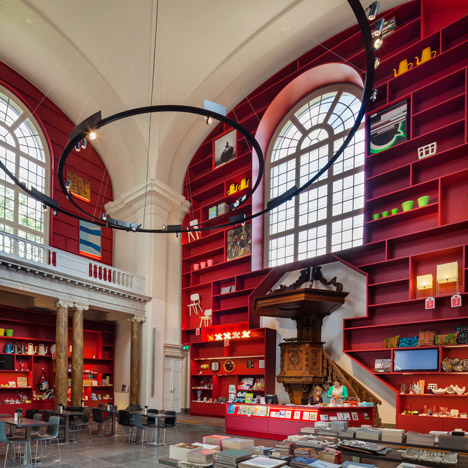 It achieves this through 264 rooftop photovoltaic panels. There are also 22 solar thermal collectors, generating 45 per cent of the energy needed to heat the building's water, while sunshades are integrated into the south facade to reduce solar gain.

Dezeen Book of Interviews: Winy Maas features in our new book, which is on sale now

"This emerged from an ambitious client, ICADE, and a city with a long term vision," he said. "The added demand of a preserved view line gave the project its exciting shape, it now respects the surrounding neighbours and it opens up its heart for a collective meaning."

MVRDV, whose horseshoe-shaped market hall and housing development opened last month, first unveiled its design for the 150-metre-long building in 2010.

Now complete, it has been acquired by financial services group Banque Populaire Rives de Paris. However the architects planned the building so it could also be rented out to various tenants without structural changes.

Externally the building is clad with FSC-certified timber. On the north side, the facade is broken up into rows of smoothly curving ribbons, while on the south side these surfaces bend outwards to create sharp angles.

This is intended to present "a calm side in dialogue with the urban fabric of the north side of Paris, and a more dynamic side facing south, rectangular to the boulevard".

The central void is filled with multi-level terraces and balconies, which can be directly accessed from the workspaces via a series of glazed openings and external staircases. Greenery is provided by trees in oversized plant pots.

A central lobby offers the main point of access to the building, while internal circulation centres around three staircase and lift cores.