Five box-shaped blocks radiate out from the centre of this Barcelona house by Spanish firm RTA-Office, separating living areas from the client's workspace (+ slideshow).

RTA-Office designed the 290-square-metre building, named House and Studio YC, in the village of Castellcir just outside Barcelona. 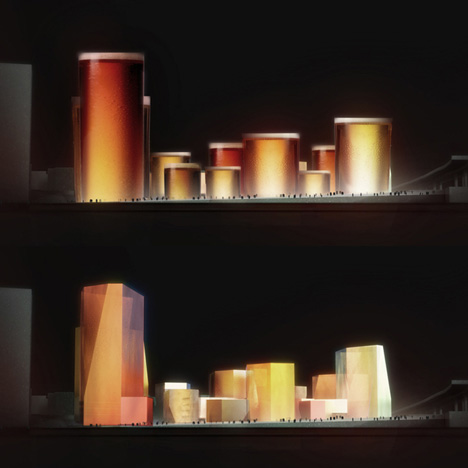 The space is arranged as five connected wings that project out from the centre of the plan, isolating an entrance hall and staircase, a kitchen, a living room, and three bedrooms from each other.

According to the architects, the sprawling plan was influenced by the shape of the site and presence of existing trees. Glazed end walls allow each room to frame a different view of the rural surroundings.

"The main focus of the house is to capture segments of natural light and the change in space throughout the day and year depending on seasons and weather," said the team.

The roofs of the units incline by 30 degrees from the flat top of the central hallway to the upper edge of the window panes, creating higher ceilings around the building's perimeter.

The earth-coloured stucco exterior was designed to help the building blend in with the surrounding landscape – a local planning stipulation.

"Similar to both tree trunk and soil, the house colour fits in perfectly with the ochre range of colours of the surroundings," the architects told Dezeen.

The main entrance is located in the basement level, where a sloping driveway leads to an underground garage and studio. The space is lit by a slim section of glazing that extends down from overhead.

A flight of angular white steps ascends to a bright, white interior space with light wooden floors. Small courtyards situated between each prong of the building help to bring in more natural light.

Two of the wings are subdivided lengthwise to create separation between bedrooms and bathrooms, while the other three are left open-plan, including a kitchen with a lowered ceiling.

Photography is by Lorenzo Vecchia.