Inside Festival 2014: Virginia Lung of interior design firm One Plus Partnership explains why she used a palette of black and white for the interior of the Cine Times cinema in Hong Kong (+ movie).

Cine Times, which won the Civic, Culture and Transport category at Inside Festival this year, occupies the thirteenth floor of Hong Kong's Times Square shopping centre.

It replaces an earlier cinema on the ground floor that had to close a few years earlier because of unaffordable rents.

"This cinema has been in Hong Kong for many years," says One Plus Partnership co-founder Lung in the movie, which was filmed in Singapore at Inside Festival 2014.

"Hong Kong people we went there a lot. But it is a memory because it [closed] a couple of years ago."

Because of local people's nostalgia for the old cinema, Lung wanted to evoke a sense of old movies in the new cinema.

"Because of the memory [of the original cinema], I decided to use the old world of a movie," she explains. "So that's why we're using black and white only."

The lights in the ceiling are designed to look like they are from a movie set, while undulating panels along the walls represent rolls of film. 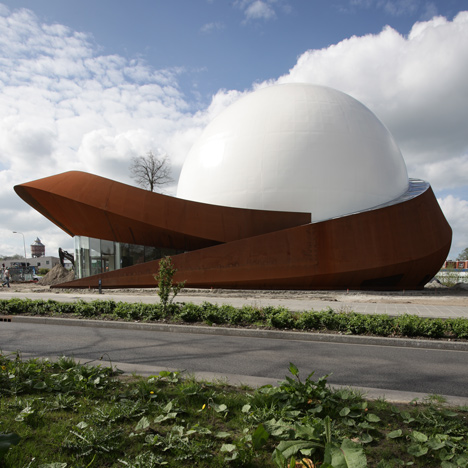 "You can see the abstract form of rolls of film everywhere in the cinema," Lung says. "Especially the lobby."

The cinema's air-conditioning system is also hidden behind these wall panels, allowing for much more generous ceiling heights.

"The air-con company told us we couldn't have a ceiling height higher than 2.4 metres," explains Lung.

"But because it was such an important cinema for our client – it is their flagship – we thought a lot and finally decided to put all the ducts along the wall."

We've been publishing interviews with all the category winners from this year's event over the last few weeks. You can watch all the movies below.