Malaysia Square will form the heart of the £8 billion redevelopment of the iconic former power station site in south London, and will feature a flower-shaped fountain and an array of bridges.

Rumours that BIG, the firm led by Danish architect Bjarke Ingels, had been appointed to design one of the key spaces of Rafael Viñoly's 17-hectare masterplan circulated last month, but have been confirmed today by London mayor Boris Johnson.

The space will link the pedestrianised high street at the centre of Frank Gehry and Foster + Partner's proposal, known as Electric Boulevard, with the southern entrance of the Grade II-listed landmark, which is being revamped by Wilkinson Eyre. 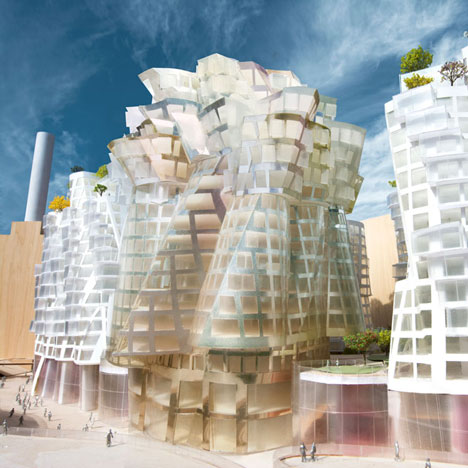 New images of the proposals show the public square's design as a "two-level urban canyon", with integrated bridges and stairways "inspired by Malaysia's landscape and geology" – a nod to the Malaysian company responsible for the development.

Materials will include a mixture of limestone, granite, marble, sandstone and gravel, with dolomite striations to direct people through the space. There will also be amphitheatre featuring a five-petalled fountain shaped like a hibiscus – Malaysia's national flower.

"Situated at the very foot of the towering Battersea icon, the new Malaysia Square derives its shape from human flows, creating a cascading landscape carved into the street," explained Ingels, whose current projects also include a visitor centre for Lego.

"As an urban canvas of possibilities for cultural expression, where landscape, architecture, urbanism and media design are in complete harmony, the new Malaysia Square lends dignity to the majestic industrial heritage while paving the way for a new Malaysia identity."

Malaysia Square will be Ingels' first project in the UK. Other architects working on the project include British firms Ian Simpson Architects and dRMM, who are creating new housing in the first of seven development phases.