News: Thomas Heatherwick's £175 million Garden Bridge proposal for London has been approved by Westminster Council amid claims it will be the "most expensive footbridge in the world".

Update 19-12-14: the Garden Bridge has been approved by London's Mayor's Office. "I am happy for Westminster City Council and Lambeth Council to determine the applications for the Garden Bridge themselves," said deputy mayor for planning Edward Lister.

The 367-metre pedestrian bridge, which consists of two fluted piers supporting a promenade planted with trees, is set to span the River Thames between the South Bank and Temple Station.

Earlier today, BBC journalist Tom Edwards reported that the bridge would be the most expensive crossing of its kind, partially due to the materials being used in its cladding.

"Civil engineers have told us at £175 million the Garden Bridge will be the most expensive footbridge in the world in part due to copper cladding," said Edwards on Twitter.

Westminster Council, on the north bank of the Thames, was one of two London boroughs that needed to green light the plans for the bridge. Its local government councillors approved the scheme by three votes to one in a planning meeting this evening.

Lambeth Council – the planning authority responsible for the development on the south side of the river – gave its approval in November. The project still needs a formal approval from London Mayor Boris Johnson, who has already declared his backing for the scheme. 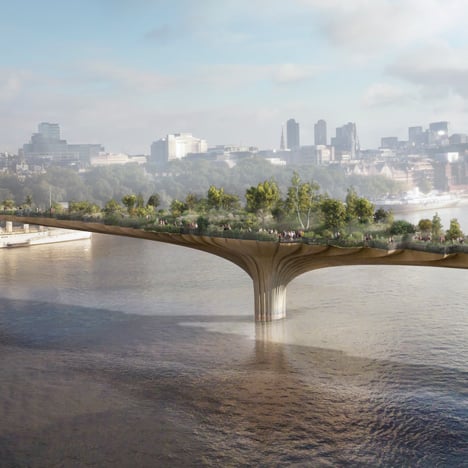 Further examination of the planning documents last month revealed that groups of eight people or more would have to apply for permission to cross the bridge, a rule introduced partially in an attempt to discourage "protest groups" from occupying the structure.

British architecture news site BDonline also said that the bridge would cost £3.5 million a year to operate and maintain.

It will be funded, managed and maintained by the Garden Bridge Trust, a charitable organisation created for the sole purpose of realising the project. The trust is adamant that the public will not be charged to access the bridge.

Heatherwick Studio is working alongside engineers Arup and landscape designer Dan Pearson on the project.

Westminster's planning officers had recommended that the local authority's planning panel, consisting of four councillors, approve the scheme "subject to appropriate measures to secure the long term funding and maintenance of the bridge".

"The substantial benefits of the new bridge, the iconic architecture, new connectivity and additional views created from the bridge, outweigh the harm to views from Waterloo bridge and the South Bank," said the planners.

Over 120 people attended the hearing tonight at Westminster City Hall, with interested members of the public being forced to stand at the back of the room to hear the results.

The committee was shown an extensive array of slides demonstrating the effect of the bridge on historic views of the Thames and landmark buildings including St Paul's Cathedral, designed by Christopher Wren.

The planning officer responsible for the scheme said that had it offered no public access it would have been rejected, but added that these "lost views" would be compensated by new vistas from the bridge.

Reporting from the planning meeting, local news site SE1 said that councillor Davis had declared that he had "always been a fan" of Heatherwick and said that he believed the bridge would be a "superb addition" to London. Councillor Tim Mitchell said the design of the bridge was "excellent".

The Garden Bridge Trust will now need to raise the remaining funds to build the structure, and secure Transport for London as a guarantor on maintenance fees as part of the conditions of Westminster's approval. Construction is due to start on the project in 2015.