JDS Architects used staggered balconies to create a cascade of cubes across the facade of this Seoul officetel – a kind of housing and workplace hybrid typical in South Korea (+ slideshow). 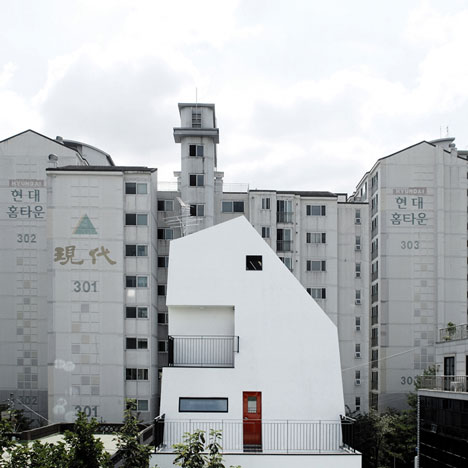 Described by the Belgian architect as "a new dimension for the officetel typology", the design aims to rethink the typical layout of the common South Korean building, which commonly consists of small units that allow occupants to live and work in the same place.

The starting point for the design was the orientation of the site, which wraps around a corner at the base of a hill. In its current configuration, over 30 per cent of the residences would face north, and a handful would overlook their neighbours.

The architect avoided this by shifting the floor plans so that many of the 25-square-metre apartments sit at an angle. This helped to direct windows towards the west or east, offering more natural light.

To complicate the facade even further, De Smedt staggered the apartments across different floors and added balconies across the front of each one, creating a pattern of tessellating cubes.

"This shifted facade creates a special identity for the whole complex – a lively and exclusive appearance that becomes the trademark for this unique building," he said.

The building is located at the base of a hill. Its volume has been split into two and it frames a large communal courtyard that opens out to the landscape at the rear.

Each residence consists of a simple rectilinear unit with a self-contained bathroom, a small kitchenette and a combing living and sleeping space, as well as the decked balcony.

Zigzagging paving in front of the building mimics the pattern of the facade, forming a new public space overlooked by residents.

Glazed shopfronts surround the ground floor, while a drive-through entrance leads down to five levels of underground parking, offering enough space for each resident to park a car.