Slideshow feature: here is a look at some of the buildings designed by the Spanish architects José Selgas and Lucía Cano, designers of the 2015 Serpentine Gallery Pavilion. 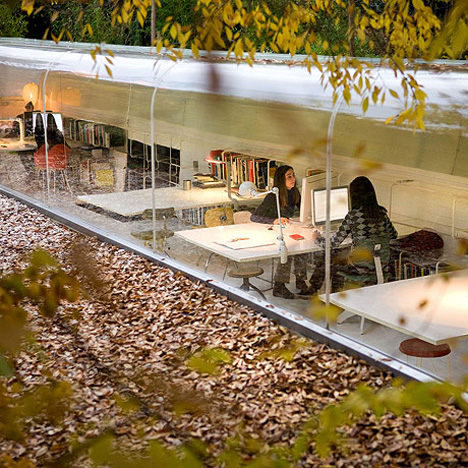 Office in the Woods by SelgasCano

Early projects include a conference centre and auditorium in the Spanish city of Badajoz and a sunken rust-coloured house in Madrid, but the pair first attracted international attention with the design of their own office – a transparent tunnel surrounded by woodland.

In 2011 they completed Factory Mérida, a street sports facility combining colourful climbing walls with curved concrete landscape for skating and cycling. The whole thing is sheltered beneath a bulging orange roof.

The same year, they finished work on a culture and performing arts centre on the harbour of Cartagena, south-eastern Spain. Named El B, the building features a stripy facade, a light-filled interior, and an assortment of staircases and ramps.

The 2012 Venice Architecture Biennale saw the duo fill the Spanish pavilion with what they described as "a hanging and moving garden" designed to explore technologies in agronomy – the science of soil management and crop production.

Other projects include a tiny medical clinic in the Turkana region of Kenya and the recently completed auditorium and congress centre in Cácere that resembles a translucent meteor.