Barbosa & Guimarães was commissioned to design the Douro Marina buildings for a harbour situated at the mouth of the River Douro, an inlet from the North Atlantic Ocean. 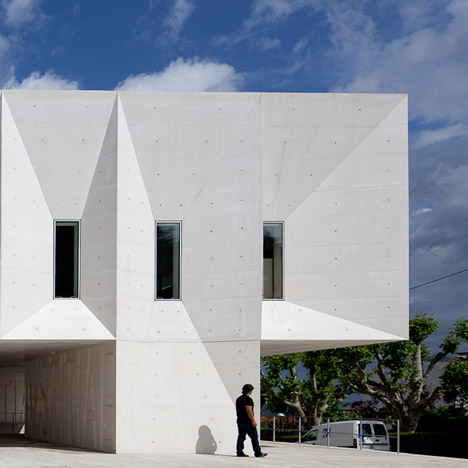 The complex, which faces Porto across the water, comprises three volumes. A long administration block runs along the waterfront, and two shorter blocks containing a restaurant and spa project off a slope to one side.

The waterside buildings are fronted with curved steel beams, which reference the framework of small gangways that connect the harbour wall and jetties.

Behind this steel frame, the facades are made up of large sections of glass and white-painted steel with circular indentations that take on the appearance of a ship's riveting.

The longest of the three structures runs parallel to the harbour wall, creating a paved promenade between an access road and the water.

Chunks of square-sectioned steel from the building's construction are dispersed along this pedestrian path to form seating areas around pockets of planting.

"The linear building, which stretches along the existing car park, defines the boundary between pedestrian and automobile," said the architects.

A wide flight of stairs at one end of the building leads directly to the upper floor, where the steps pass through a suspended hood that exaggerates the length of the upper storey.

At the centre of the building, the glass facade detaches from the metal framework to indicate a ground floor entrance. Training and changing rooms, administration offices and event spaces inside are spread across the upper and lower floors.

Narrow staircases rise through a double-height atrium to the upper level where the wells are surrounded by thick white or mirrored balustrades.

Tube lights are set periodically into ridges of the corduroy-textured ceiling, and concertina shutters slide across runners to divide the open-plan space.

Further along the coastal path, two glass and steel volumes project off a grassy slope. The glass boxes are supported by the steel arcs and anchored to the slope by two-storey white blocks.

The two buildings – one housing a restaurant and the other a spa and gym – are accessed by pathways and steps that run up the back of the slope from the road and car park.

Photography is by José Campos.