Music: artist Chloe Early contrasts concrete urbanism with lush landscapes to create a coming of age story in her music video for the song Iris (Hold Me Close) – one of 11 that were premiered simultaneously for U2's latest album Songs of Innocence.

Update: following a 24 hour exclusive hosting period on Dezeen, this video is now only available via iTunes.

East London-based painter Chloe Early drew on her childhood in Ireland and her impending motherhood to develop the narrative that unfolds in her video for Iris (Hold me Close), that was hosted exclusively by Dezeen. 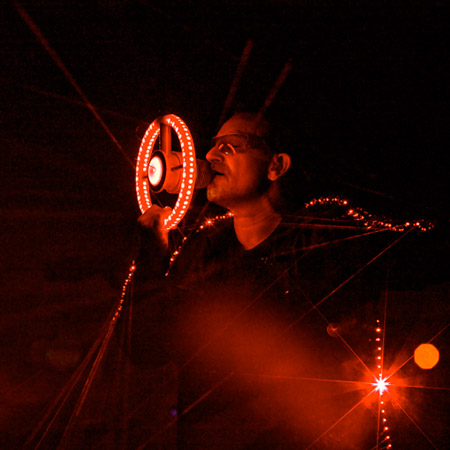 "The band took inspiration from the political murals of Northern Ireland and gave us that information as a starting point," explained Early. "My film is a personal response to my own connection to Belfast as my mother grew up there but chose to bring us up in Cork – the furthest city in Ireland from the troubles as she wanted to shield us from that environment."

"About to become a Mum to a boy myself at the time of listening to the song, the lyric 'I've got your life inside of me' stood out."

The video – part of the Films of Innocence series launched on 11 different websites around the world for 24 hours – interprets the moment of transition from boyhood to manhood as a journey from an urban environment to the seaside, through an open grassy landscape.

A 14-year-old actor, Ryan Turner, plays the main character who is given the tools for his journey at his last childhood birthday party in a high rise flat above an unnamed city.

"I wanted to make a coming of age story and capture the moment of masculinity as it transitions from boyhood to manhood," said Early. "We chose to represent this as a journey through landscape, playing between the imagination and reality and painting and film."

"I had no idea until the album was released that the song is Bono's tribute to his own mother who sadly died when he was 14," she added.

Working with producer and director Robert Francis Muller, Early created a new artwork to feature in the video as well as designing the overarching narrative.

The film jumps between moments, creating a fragmented effect that is intersected with scenes of a dark corridor. As the journey of the boy progresses, the viewer is taken further into the corridor reaching a climax at the very end of the song, revealing Early's painting.

"As the deadline was quite tight for the project I was working on my painting in the studio when Rob was filming with Ryan in the countryside locations so that had a few challenges," said Early.

"It was an interesting departure for me as I'm used to working by myself in the studio so it required a level of teamwork and communication with all parties that is quite alien to a painter," she said.

Early was one of 11 artists given complete creative freedom to make a music video for each track on Songs of Innocence.

Each movie was hosted by a different site for one day only before all going on sale on iTunes.

"Taking the political murals of Northern Ireland as a reference point, U2 pioneered the project to celebrate the unique democratic power of urban art," said a statement from the band.

"The result is an exhilarating display of diversity in approach, style and commentary. Powerful and cognisant, their works scale the globe, play with time, and weave between heightened reality and animated dreamscapes."