Nineteen London-based designers including Dominic Wilcox and Paul Priestman have created miniature fantasy rooms for an exhibition of Dolls' Houses at the city's Museum of Childhood.

The V&A Museum of Childhood in east London commissioned designers to create their "dream room" inside a 30-centimetre wooden box. Combined in one installation, these form the finale for the exhibition Small Stories: At Home in a Dolls' House, which showcases dolls' houses dating from 1712 to 2001. 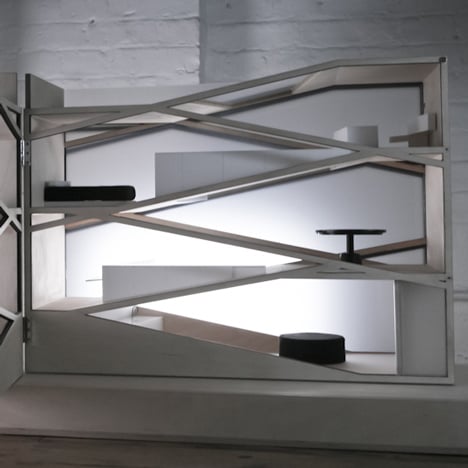 A Doll's House for Clementine by TDO Architecture

"The brief was very open – basically, I asked people to create their dream room in miniature, to reflect on the idea of 'ideal' or 'fantasy' rooms," curator Alice Sage told Dezeen.

"It could be fantastical, whimsical, aspirational or technological, it just had to be small!"

Sage said the designers were selected because "they all have really different points of view, are based in London, and do interesting innovative work that I though would be fun to see in miniature."

"I wanted a selection of designers from different backgrounds, a few well established designers as well as people just starting out who are doing great work," said Sage. The contributors range from furniture and homeware designers – such as Peter Marigold and Bethan Laura Wood – to textile designers including Donna Wilson.

Dominic Wilcox's Offline Hideaway, Sage's personal favourite, shows a girl on a sofa reading, at the top of a precarious-looking stack of furniture. A tiny laptop is used to prop the leg of a wobbly chair. "In Dominic's little room, there is space and time away from the demands of the digital," said Sage.

"Paul looked back to his childhood, and the memory of making pin-hole viewers out of shoe boxes. The experience of peering into a darkened space, and seeing something unexpected and magical, stayed with him," said Sage.

Product designer Roger Arquer has created a minimal bathroom with a wall of green moss and marble pebbles. Two curved brass faucets emerge from the floor while a glass bulb hangs from the ceiling.

"The room is both a playground and an in-between space where you are just as likely to simply pass through as hang around," said PearsonLloyd. "What lies beyond is simply a matter of dream and the imagination."

East London Furniture has mocked up a miniature version of their current studio space, complete with lead windows and brick walls. "As East London Furniture move on to new studios, this little room will act as a memorial and reminder of the Bermondsey building," said Sage.

Both Bethan Laura Wood and Donna Wilson have filled their dream rooms with miniature versions of their own designs in colourful patterns.

In the exhibition the boxes are stacked on top of each other to create a complete Dream House, which sits underneath the words "In miniature, impossible dreams can come true".

Small Stories: At Home in a Dolls' House is on show at the V&A Musuem of Childhood in Bethnal Green until 6 September 2015 and entrance is free.

Dezeen has also featured dolls' houses by architects including Zaha Hadid and David Adjaye, each integrating a feature that would make life easier for a disabled child.