Sitting at an altitude of 3,600 metres, the single-storey house is located near Chimborazo mountain, which Turner described as "a golden land" in his 1916 poem. 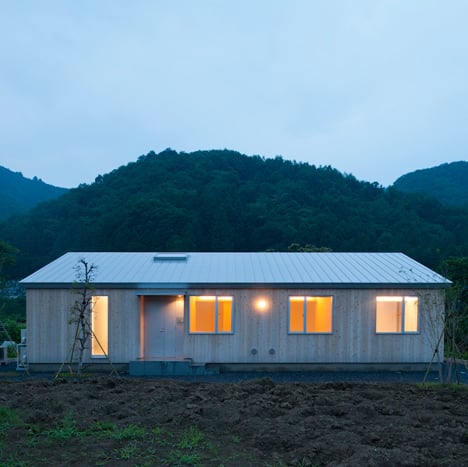 Felipe Escudero named the project Clover House on account of its trefoil plan. It features a curvaceous concrete form with three petal-shaped wings.

The largest of the wings accommodates a trio of bedrooms with accompanying bathrooms, while the other two contain a living space and a combined kitchen and dining room. Terraces occupy the external spaces in between.

"Conceived for the high altitudes and extreme weather of the Andes mountain range, the walls of the retreat design the exterior spaces as much as they define the interior ones, ensuring that all parts of the dwelling receive direct sunlight throughout the day," said the architect.

"The plan of the house accepts the traditional Latin American approach to divide the sleeping from the living and from the kitchen. These elements are organised and connected by a single continuous wall that takes on a variety of geometries," he added.

The building's walls are formed of reinforced concrete aggregate that was produced using ground material found in the surroundings. Escudero constructed the house himself, with help from local builders.

Interior wall surfaces are plastered and painted white, while flooring is wooden. Large windows were also added to frame views of the mountain landscape.

At 6,268 metres Chimborazo, an inactive volcano, is the highest peak in Ecuador. Turner’s poem describes how as a young boy he was mesmerised by the romantic names of mountains in the Americas and starts: “When I was but thirteen or so I went into a golden land; Chimborazo, Cotopaxi took me by the hand”.