Hungarian architecture studio Hello Wood has created an 11-metre-high Christmas tree for a square in central Budapest from 15,000 kilograms of wooden logs (+ movie).

Hello Wood's brief was to create a Christmas tree for the Budapest community. Their response, the Charity Tree, has a conical timber frame with sawn logs stacked perpendicular to its surface. 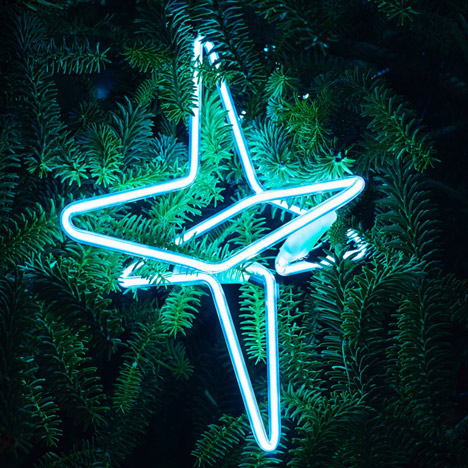 At the top, the wood lengths get longer and protrude out further to form a pinnacle crowned with a metal star.

A scattering of the circular sections are painted white to reference the ornaments that usually hang from the branches of traditional fir Christmas trees.

The structure was built and filled in over five 24-hour working days. After dark, it is illuminated using special lighting effects designed by Philips Hungary.

A doorway in the back allows members of the public to climb inside the tree and make use of seats formed from more logs, which are positioned around the edge.

"Inside the tree there is a chapel-like sacred inner space, where everybody can find some silence to contemplate in the middle of the buzzing city," said the designers.

"The Charity Tree belongs to the people of Budapest until Epiphany. It can be visited during day and night."

When the tree is dismantled on the Twelfth Night after Christmas – the date decorations are traditionally taken down – the firewood will be given to families in need.

"The installation represents the importance of the community and social awareness: not only because people traditionally gather around Christmas trees to celebrate together, but also because at Christmas, it is particularly important to think of the thousands of Hungarian families who have daily problems with heating during wintertime," said the designers.

Hello Wood worked in collaboration with Design Terminal – the Hungarian state agency responsible for the stimulation of the creative industries – and the Hungarian Interchurch Aid.

The installation follows a similar project in 2013, when the architects built a Christmas tree made from 365 wooden sledges that were given to a local children's charity following the festive period.

"The role of architecture has changed a lot in the last few years. After the [economic] crisis it has become more important to create works which are for everybody, not only the exclusive one per cent of the population," said a spokesperson for the studio, which runs an international art camp every summer.

Photography is by Daniel Dömölky.