News: luxury watch brand Montblanc has entered the wearable technology market, choosing to add a device to its straps instead of turning its analogue timepieces into smartwatches.

Montblanc's e-Strap is a Nato-style leather strap with a 40 millimetre long, 14.2 millimetre wide OLED screen mounted on the side of the band that sits underneath the wearer's wrist.

It connects to a smartphone via Bluetooth, and can work as a remote camera trigger or control for a music player, vibrate to alert the wearer to incoming texts, calls, emails and social media activity, and collect physical activity data for an accompanying app on the user's phone. 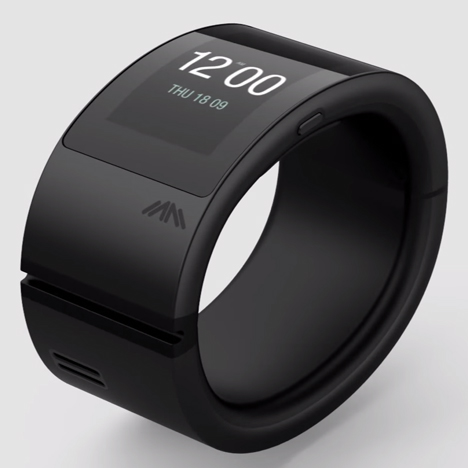 It also has a "find-me" function that helps the user to find their phone using their watch and vice versa. The device is compatible with both Android and iOS mobile operating systems. It is housed in a stainless steel case with a diamond-like carbon coating. Montblanc said that the battery life would be five days, and the device can be recharged via a USB connection.

The screen can be removed from the strap – which is designed to accompany new additions to Montblanc's Timewalker range, which debuted earlier in 2014 – and added to any other 20 or 22 millimetre-wide band. It will be available to buy separately from the watches.

Last year proved to be a busy one for wearable technology, with a slew of unusual products that included an activity tracker for vaginas, and the unveiling of the much-hyped Apple Watch. But Montblanc is one of the first established luxury watch brands to offer its approach to the burgeoning smartwatch market.

"While it doesn't represent the sentiments of all luxury watch makers, Montblanc's upcoming release of the e-Strap is a healthy sign that the often conservative luxury watch industry is trying to work with smartwatches rather than ignore them," said Ariel Adams of A Blog to Watch, the specialist watch site that debuted the e-Strap.

"Why isn't Montblanc simply producing a smartwatch that combines technology with luxury watch design and materials? Well according to most people in the luxury watch world, that isn't what most of their consumers want," he added.