Dezeen and MINI Frontiers: Dutch designer Teresa van Dongen explains how she created a lamp powered by bioluminescent bacteria usually found on octopuses, in this movie filmed in Eindhoven.

Van Dongen's Ambio lamp, which was her graduation project at Design Academy Eindhoven, consists of a glass tube filled with bioluminescent bacteria in a saltwater solution.

"Ambio is a lamp that works with bioluminescent bacteria that are usually found on the skin of an octopus," says van Dongen in the movie, which was filmed at the Sense Nonsense exhibition at the Van Abbemuseum during Dutch Design Week.

"We isolate the bacteria, grow it and place it in an artificial seawater medium with the right nutrients and food."

The lamp is suspended with the glass tube at one end and a counterbalancing weight at the other. When it is gently rocked the liquid in the tube is mixed with oxygen, causing the bacteria to glow.

"You might know the phenomenon of these bacteria from the sea," van Dongen says. "Whenever a wave turns, oxygen is mixed with the waves and these bacteria react to oxygen." 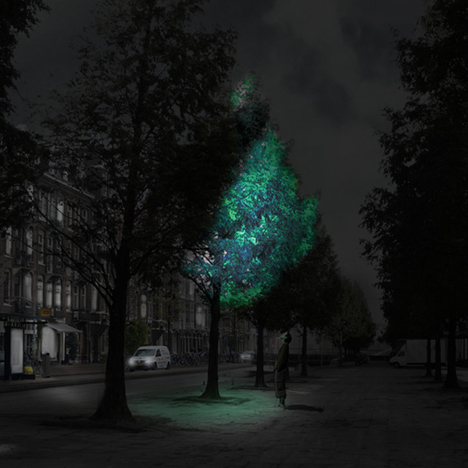 "Once you give it one gentle push it will swing for 20 minutes and as long as it moves it will emit light."

Currently, the bacteria can only survive in the tube for two days, but van Dongen is investigating how to keep them alive for longer.

"At the laboratory we are researching how to keep the population alive for a longer period of time," she says. "Right now in the scientific set-up that we have [the bacteria] have survived for three weeks."

Van Dongen admits that Ambio is not currently a practical light source that could be used in everyday life. However, she believes the project demonstrates the potential of harnessing bioluminescent organisms to create light more sustainably.

"We are all looking for new ways of creating energy and light and [Ambio] is the start of something," she explains. "I'm not saying this is already a lamp to read a book by, but maybe if it is developed further it can lead somewhere."