Japanese artist Takaya has added stuffed dead birds to designs in his latest collection of raw vegetable and flower headpieces.

Takaya's new works include a pheasant's head emerging from a mass of black leaves and a bird that envelopes one side of the model's head with its open wings and tail, alongisde the blooms. 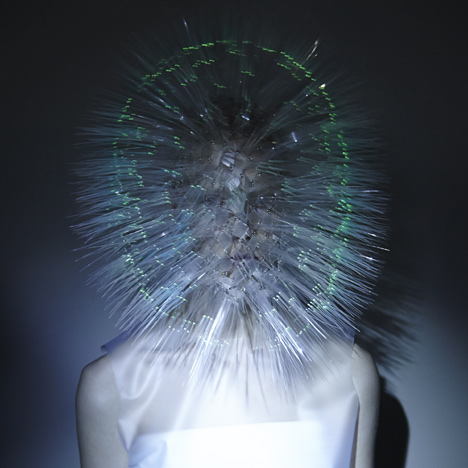 Prickly headdresses by Maiko Takeda glow in the dark

"My new works use new materials such as stuffed animals, which shows withering and death in contrast with flowers blooming with life," Takaya told Dezeen.

"My new works are inspired by one lady – I designed all the images for her."

The designer has also created a range of headdresses specifically for men, which includes a hat of large purple petals from different plant species and a headpiece made from dried twigs, grasses and roots.

The pieces are created during live performances, accompanied by stringed instruments playing an improvised score.

Models appear on stage with fabric bags on their heads. The bags are removed and the artist attaches clusters of plants to their styled hair, in the same way that a florist might arrange a bunch of flowers, before pruning them with hairdressing scissors.

"There are two different processes of designing headdresses," said Takaya, who has been working with this technique since 2004.

"One is imagining complete figures like a picture in my head and making towards it. The other is browsing through the flower markets and choosing flowers in which I feel strength.

"Every single flower has its own power, but Dahlias are the strongest flower for me. Then, when I actually put the first flower on the model's hair, that's the beginning of the design process," he added.

Takaya's recent live shows include Men in Tokyo and Kyoto, and the opening performance for the Ikebana and Contemporary Plant Art Exhibition in Sweden.