The product was conceived as protective headgear for the fishing community in Japan's Sarufutsu village where around 40,000 tons of scallop shells go to waste every year, according to Shellmet's creators.

The Shellmet is fastened with a nylon chinstrap and shaped like an oversized, ridged seashell.

Its structure is made from Shellstic – a material developed with Koushi Chemical Industry Co that combines scallop shells from the seafood industry with recycled plastic.

"Scallops are the most commonly eaten shellfish by Japanese people and it is also the shellfish that results in the most amount of waste," TBWA\Hakuhodo told Dezeen. "We asked ourselves, what if we could turn these scallop shells into a new resource instead of waste?"

"Shells that have protected themselves from external enemies are now reborn as something that protects human life."

Shellstic is created by boiling and sterilising the collected shells, which are then finely crushed, mixed with the plastic and inserted into a helmet mould.

Shellmet's materials can be recycled to remake another helmet or reused separately as building materials.

According to its creators, the helmet draws on biomimicry – a design strategy wherein systems found in nature are adopted by humans to solve problems. 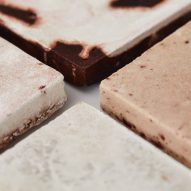 "Shellmet incorporates a special rib structure in its design that mimics the structure of scallops," TBWA\Hakuhodo explained.

"Based on an internal experiment, we discovered that the [helmet's] durability is improved by about 30 per cent compared to cases where the rib structure is not available, despite the small amount of material used."

Although the helmet was initially designed for Sarufutsu's fishing workers, the advertising agency said that Shellmet can also be used as a cycling helmet or a hard hat during disaster prevention work.

The product is slated to go on sale to the public this spring.

This is not the first time that designers and researchers have used waste seafood shells to create new materials. Other projects that have utilised similar composites include architectural tiles made from mussels and furniture for a restaurant in Gothenburg made using waste oyster shells from its kitchen.

The photography is by Junya Taguchi.