Raftery and Lowe were commissioned in 2012 to document the construction of the building at 122 Leadenhall Street, which hit the headlines earlier this week after it was revealed that a number of its steel bolts were suffering from "Hydrogen Embrittlement", causing them to fracture.

Rogers Stirk Harbour + Partners approached the pair after seeing the movie they had made showing the final stages of construction for The Shard. 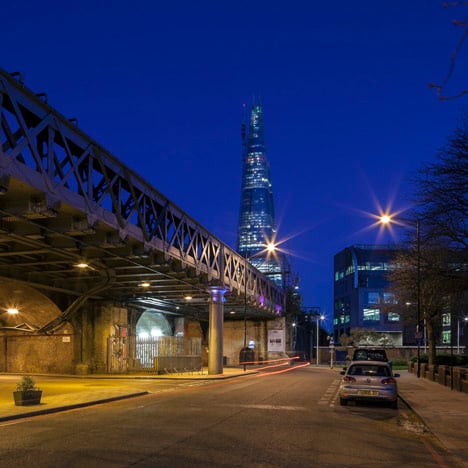 Their final film, which follows a "teaser" released half way through the project, was edited from over 320,000 photographs.

"After the first six months of filming the Leadenhall Building, we covered so much development on the site and had some fantastic footage it was decided to release a taster film," Lowe told Dezeen.

"That film went down really well, both in the architectural and film making worlds and we had found a great rhythm and technique for capturing these huge architectural projects. It was hard to wait until now to release the finished film."

The movie uses images to document the final two years of construction on the 50-storey Leadenhall Building, which is the tallest skyscraper in the City of London, as well as offering a glimpse inside the office spaces towards the top of the structure.

One of these floors will become the new home to the building's designers – the London-based architecture firm originally founded by Pritzker Prize-winning architect Richard Rogers – who this week confirmed they would relocate from their west London home of the past 30 years.

The glass-clad building tapers to form an angled peak – a shape designed to respect views of St Paul's Cathedral, which also earned the building its Cheesegrater nickname.

Although filming in the City of London has occasionally proven problematic for cameramen due to security restrictions, Raftery and Lowe's biggest obstacle was gaining access to the inside of the Cheesegrater itself due to construction site rules.

"We didn't really encounter any problems filming in the City or anywhere else across London," explained Lowe. "Finding the perfect spots to film from was the hardest challenge, and getting permissions and access to rooftops, but when you show people what you are working on they are always more than happy to accommodate."

The film maker said that the views from the top of the 224-metre building were among the best he had encountered in London.

Raftery and Lowe first met at London's Commonwealth Institute, where Lowe was working on another timelapse film and Raftery was photographing the building for the announcement of the site becoming the new home of the Design Museum.

"I have been shooting timelapse for about seven or eight years and love the awareness it allows you when you view a city or other scene. There is a whole other world happening at a different pace, things move and synchronise in ways that you just can’t perceive in real time," said Lowe.

"Also still (DSLR) cameras offer up so many techniques, tricks, the quality, and so much more that aren't possible on other cameras. This is of course true the other way round but for this type of documentary, timelapse was the only choice."

The pair used Canon and Nikon cameras to capture the images of the Leadenhall Building used in the final edit, with a wide range of lenses. They employed a variety of techniques to highlight different features of the building, including images captured travelling down the side of the structure in a glass lift and scenes that show it illuminating as dusk sets in.

"Choosing the right days to film goes a long way to maximising the quality of footage. Paul is an architectural photographer by trade and I come from directing TV commercials, music videos and other documentary work, so projects like these are a great opportunity for us both to practice our skills and develop them further," said Lowe.

"We both love our jobs and even on the bleakest winter morning at 5am waiting for a truck to roll around the corner carrying a huge section of the building, we can still find the enjoyment as you know that when you watch the rushes back later that day that it is always worth it to get the right shot."

The Leadenhall Building film also features a bespoke soundtrack composed by George McLeod, and the movie was edited by James Simpson. Final colouring was done by Kenny Gibb at StudioRM.