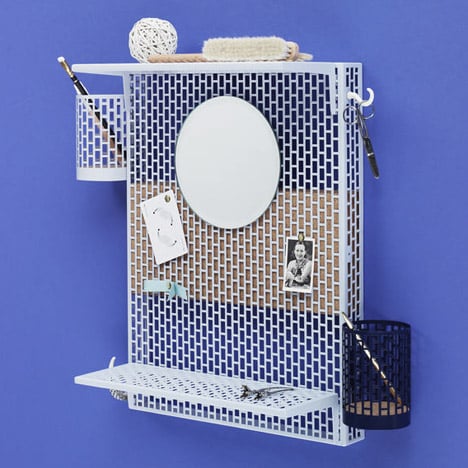 A single large upholstered cushion is folded and tucked to form rectangular panels for the seat, arms and back of each chair.

Its shape is fixed in place by the metal stand, which forms four legs and extends up the back.

"The structure functions like a giant clamp which holds the one-piece quilt in the jaws formed from the main uprights," said Sempé, who has also created a sofa for the brand by draping a quilted cover over a wooden frame.

Extra fabric is doubled over at the tops to create a simple detail around the edges. The footstool uses the same technique as the larger chairs, with two ends tucked under the legs brackets on either side.

While many seating designs aim to hide the frame, the designer wanted to offer a glimpse of the construction in each piece.

"Of the structure one sees only a trace of matt black metal, which sinks into a soft, puffy mattress divided into symmetrical rectangular bulges, like a spoon in Italian meringue," Sempé said.

Sempé began the collection by designing the armchair, based on fond childhood memories of seats from a seaside visit.

"As a child, we had two armchairs at the seaside, massive like elephants sitting on their hindquarters, the front legs of which formed the armrests and 'ears'," she said.

"Redesigning such an armchair is a difficult undertaking: I had to work with this typology without nostalgia, seeing past its common association with convalescents or the retired."

The sofa and footstool followed later, forming a range that launched yesterday at the imm Cologne trade fair and will be presented at Maison&Objet in Paris from Friday.

Sempé has also designed a fabric to be used to upholster the seat cushions, which is due to launch in April.