An ivy motif spreads across the exterior of this bookstore in Japan by Klein Dytham Architecture, while the interior presents books and magazines on a "street" that also includes a cafe and a hair salon (+ slideshow).

Located 30 miles south-west of Tokyo, Shonan T-Site is the second store that Astrid Klein and Mark Dytham have designed for Japanese entertainment retailer Tsutaya and is intended to build on the most successful elements of the first project.

Like the first store, which featured a lattice facade that referenced the T of Tsutaya, the architects wanted to create a distinct brand without adding too much signage. Here, an ivy pattern references the meaning of the company name. 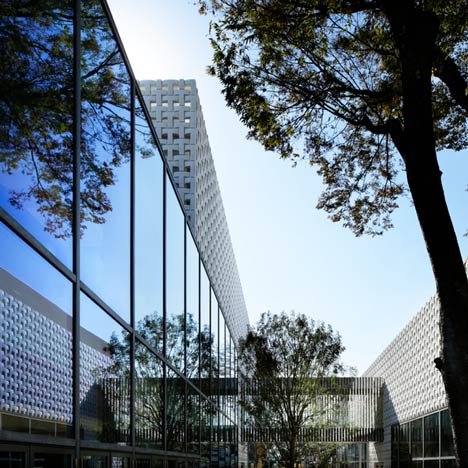 "The name 'Tsutaya' is written with two kanji letters – 'tsuta' meaning ivy and 'ya' meaning house," explained Dytham. "As a result, an ivy pattern was incorporated onto the white facade."

According to the architect, the pattern is also intended to compensate for the lack of the greenery in the surroundings – a former Panasonic TV factory that is being currently being developed into a model town.

The store consists of three buildings, arranged in a row across two urban blocks. Each one is made up of several shifted volumes that break down the mass of the complex, and also frame small patios and gardens.

"Unlike the Daikanyama T-Site, which is located in a leafy upscale neighbourhood in central Tokyo, the site of the second project was flat, with no context or greenery," said Dytham.

A 120-metre-long pathway extends through all three buildings. Conceived as an indoor street, this space presents books and magazines in different categories, alongside various shops, a hair salon and even a dog-grooming parlour.

The retail elements have been integrated amongst the printed media, so the photography books are accompanied by a camera and photo printing shop, while the cookery magazines can be found alongside kitchen utensils.

Other features include a lounge and cafe where visitors can comfortably sit and read, and a pair of restaurants offering views towards Mount Fuji.

There is also an Apple Store, where products are displayed on walnut tabletops that appear to float above mirrored bases.

"Shonan T-Site continues the reinvention of the modern-day bookstore as initiated by the Daikanyama project. However, the new space takes this one step further by also challenging conventional shopping malls and department stores with the creation of a unique 21st century retail experience," added Dytham.