A street-facing window replaces a rolling shutter at the front of this former garage in a Dublin mews building, which local architecture office TAKA has converted to create extra space for an existing house.

The 1990s mews on a street called Waterloo Lane in the city's Donnybrook suburb features a row of houses that are typically fronted by garage doors for off-street parking. 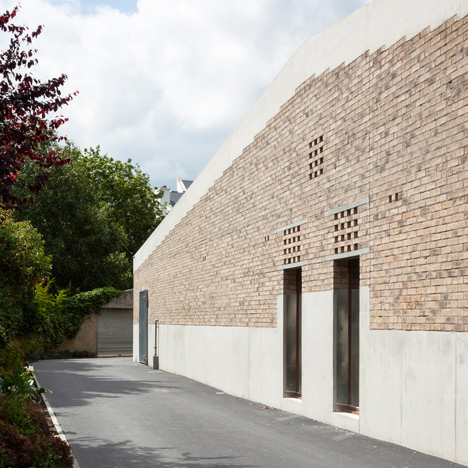 Unlike other houses on the terrace, the property has a side lane that has been converted into a new parking space. This meant the existing garage was redundant and TAKA's client was able to secure planning permission to turn it into additional living space.

"Originally the ground floor at the back was split into a narrow kitchen and living room so we opened it up to create a generous living and dining space, and the kitchen was pushed into what used to be the garage," said architect Cian Deegan, whose firm's previous projects include a mews house featuring patterned brickwork and a cricket pavilion with an angular roof.

Some stud partitions and structural walls were removed to improve the connection between the former garage and the rest of the ground floor.

The window that replaced the garage's roller shutter is now fronted by a folded steel screen with deep vertical fins that restrict views into the house's living areas.

"It's very unusual in those lanes to have a living space opening directly onto the lane at the ground floor," Deegan told Dezeen.

"The screen allows a feeling of openness from inside but from the outside you're always passing obliquely so it gives a sense of privacy."

Ferns planted in boxes at the base of the window soften the hard-edged industrial aesthetic of the steel screen and create a visual connection with the garden, which is visible when standing directly in front of the house.

At the rear of property, which looks onto the mature gardens of larger Georgian houses behind, the architects added a picture window to make the most of the natural light and views.

"The new window replaces two standard sliding doors and is intended to guide the eye up towards the mature trees that add to the feeling of space," added the architect.

Small shutters positioned above a bench next to the window can be opened to allow the owner to scatter bird food on a surface outside and then watch as birds come to feed.

An additional screen made from Douglas fir was inserted to delineate a route from the entrance porch to the kitchen.

The screen loosely separates these spaces from the open-plan living areas beyond and supports steel beams required to replace a structural wall that was removed.

The bright green colour used to identify the steel screen at the front of the property was applied to other new additions, including the steel beams and the bird feeding table.

A space at the end of the garden was screened off to form a utility space for services including the washing machine and boiler. This shed is fronted with a mirrored surface that reflects views of the garden.