Japanese studios Rhythmdesign and Case-Real came up with the design for this nursery school in Kumamoto after being given a brief to create "not a small school, but a big house" (+ slideshow).

The client for Hakemiya Nursery School wanted a building that would make children feel comfortable, so Rhythmdesign and Case-Real teamed up to develop a design featuring intimate playgrounds and domestic-scale rooms. 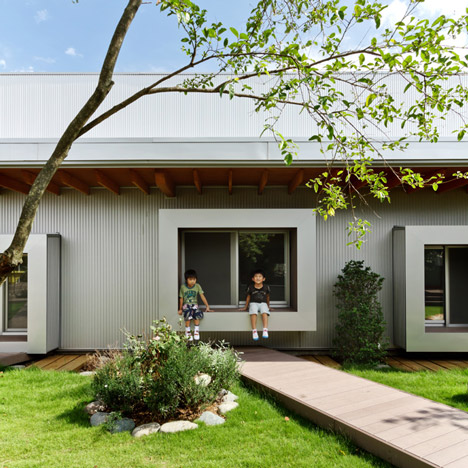 "We were asked to design a space that can embrace kids' daily activities, such as eating, sleeping and playing, rather than designing a special space as a nursery school," explained the two studios in a statement.

The two-storey building wraps around the northern end of the site, framing a courtyard at its centre and leaving space for a small playground at the sunny southern end.

"We decided on a building to divide the open space into a courtyard and a small playground rather than having one big playground," said the architects.

"This reduced scale allowed kids to feel the building was like 'home', and it also helped expand the variety of activities in the continuous area of playground, nursery room and courtyard."

The ground floor is dedicated to children between the ages of three and five. A classroom, which can be subdivided into three separate spaces, occupies the block between the playground and the courtyard to make it easy for nursery teachers to take lessons outside.

Other facilities on this level include cloakrooms, a small activity room, a kitchen and a children's support centre.

The smaller upper floor accommodates a daycare centre for babies and toddlers. According to the architects, this space would usually be on the ground floor for safety in the event of a fire, but they didn't feel this would be appropriate here so came up with a workaround – a roof terrace that can serve as an emergency exit route.

"Within this project, we put priorities on maximising the activities of kids over three years old, therefore the rooms for them are placed on the first-floor level," they explained.

Rooflines vary between flat and angled to create a variety of ceiling heights inside, while furnishings are kept minimal.

A horizontally oriented rainscreen cladding covers both the outer facades and the walls surrounding the courtyard. On the outside the walls are white, while around the courtyard they are finished in a shade of pale green.

Thanks to the natural slope of the site, there was also room to slot in a car park on a partially submerged basement level.

Photography is by Yoshikazu Shiraki.