Using a custom-designed structure suited to extreme conditions, Italian studio LEAPfactory has constructed a new building for a ski and snowboard school beside the highest mountain in the Alps (+ slideshow).

Situated in the shadow of Mont Blanc, on the south-east side of the France-Italy border, the small hut provides a new reception and lounge for the Courmayeur Ski and Snowboard School. 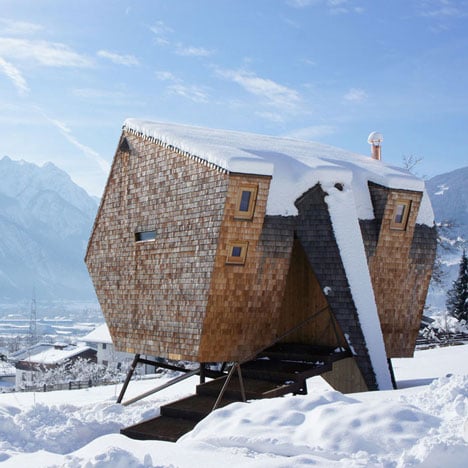 LEAPfactory, a team of researchers specialising in architecture for severe climates, used its latest modular construction system for the project – a prefabricated building kit known as S3.

Unlike the two previous models, including one designed for survival on some of the planet's highest peaks, the S3 system was developed specifically for buildings used for tourism. It can be assembled on site in a week, but can also be easily removed, leaving a location exactly as it was.

"The new structure is made with innovative, highly performing and durable materials: it does not contain concrete nor permanent parts, and it is completely reversible, replaceable and recyclable," said the team.

"Following the LEAP philosophy, the building rests on light foundations, so it can be dismantled and transferred according to future needs," they added.

The ski and snowboard school building measures six-by-eight metres, creating enough space inside for two rooms. The first serves as a reception and office, while the room behind is a living room where instructors can take time out between lessons.

The building has a beech wood framework, while its walls are made from composite sandwich panels that keep the interior well insulated. Exterior walls are clad with a weather-proof skin of aluminium shingles.

According to LEAPfactory, the system can be extended or modified as its users' needs change.

Photography is by Francesco Mattuzzi.