Photo essay: British photographer Marc Wilson has spent four years documenting the physical traces of the second world war on the coastlines of the British Isles and northern Europe (+ slideshow).

In his book, entitled The Last Stand, Wilson presents 86 photographs taken between 2010 and 2014 that show how military ruins have become embedded into the landscape, yet still serve as relics of historic events. 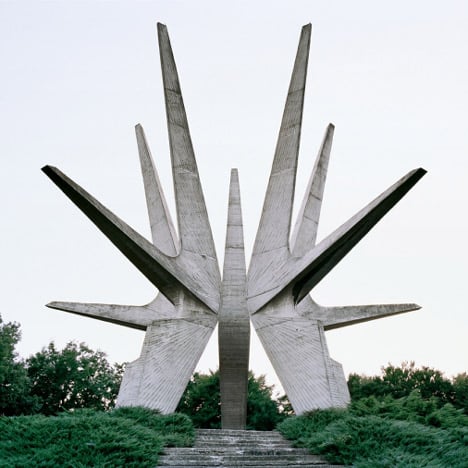 "Some of these locations are no longer in sight, either subsumed or submerged by the changing sands and waters or by more human intervention. At the same time others have re-emerged from their shrouds," said the photographer.

Wilson travelled 23,000 miles to capture these images, including along the coastlines of the UK, the Channel Islands, France, Denmark, Belgium and Norway.

War is a brute, and its brutality unleashes energies that are at once startling and terrifying. There is nothing subtle about the productivities sponsored by war; commitment is total. Such is the intensity of those unleashed energies that wars are, inevitably, historic watersheds – way-markers in the history of civilisations. In terms of the wider history of mankind they are often brief, but their effects and their traces are, invariably, enduring.

The forms of those bunkers, gun emplacements, observation posts and command centres constructed by the Third Reich using copious quantities of poured concrete, defy and eschew any established aesthetic sensibilities: no hint of the classical, the gothic or the baroque here (unless, perhaps, we were to invent the category of the abstract baroque!). Their geometries, purely contingent, were designed to resist the effects of the latest developments in projectile technology, their profiles shaped to deflect such missiles and avoid any direct percussive explosions on their structures. Those geometries developed out of the direct experiences of combat.

Those geometries developed out of the direct experiences of combat

In the American Civil War almost a century before, the ironclad warships of both sides – the USS Monitor and the CSS Virginia – had superstructures whose profiles avoided rectilinear, flat, vertical surfaces. The Monitor had a wide, cylindrical design that doubled as gun turret and control centre; the Virginia had a low-profile structure whose sides were raked back at such an angle that any incoming ordnance would be deflected, only to ricochet away harmlessly. In the Battle of Hampton Roads in 1862, both of these vessels fired endless rounds of shells at each other without either succumbing or even being significantly damaged.

Such structural solutions aimed at damage limitation, while not directly imitated, can nevertheless be seen mirrored, subsequently, in the design of those bunkers on the Atlantikwall. There was nothing speculative or arbitrary about the bulwarks of their sometimes bizarre and often ungainly forms: they were purely functional. While far from being graceful or classically proportioned, there is something visually appealing about the alien (and sometimes sinister) forms of those bunkers. Novelty does not quite describe this appeal: more surprise perhaps – a surprise that courts the sublime.

Wilson's photographs depict these ruins as mellowed through the passage of the years. Like classical ruins looming out of the mists of time, the weathering effects witnessed here, while superficial, nevertheless ameliorate and soften the intrinsic grimness of their stern facades. In his images, they merge with, rather than punctuate, their landscapes. Somehow they have become a topographical component of, rather than an imposition upon, those landscapes.

The narrow tonal range of The Last Stand emphasises that mellowness that has ultimately softened the edges of the menace they formerly possessed. Wilson achieved the paradoxical "dreamscape" atmospheres of these images by photographing the sites at dawn when not only the low angle of illumination from the sun, but also the presence of high atmospheric humidity, reduced any possibilities of brightness in the incident light around those scenes: the sense of limbo residing there, enhanced.

Before the onset of the machine age, wars were often protracted and slow-moving – measured in decades rather than months or years – and the resulting flux of peoples was widespread. The traces of those distant wars are retained not in the landscape, but in our genes, through that resultant intermixing of peoples. The relatively brief machine-age wars leave scars on the landscape that take but a few generations to pass and so their traces are also short-lived; the fierceness of modern warfare is ameliorated by its greater transience.

The mood of Wilson's photographs deftly captures this transience so clearly manifested by the ghostly presence of the Atlantikwall bunkers on the coasts of north-western Europe and the Allied defences in Britain. Repeated viewing of these images intensifies that mood, eerily immersing the viewer in their dreamlike countenances.

The above is an extract from the foreword of The Last Stand, written by Rox Exley.