Architects Tom and James Teatum have reshuffled the upper-floor layout of two houses in west London to create a pair of double-fronted flats – one spread across the second floor and another squeezed beneath the newly extended rafters (+ slideshow).

London-based Teatum+Teatum created Apartment 008 and 009 by extending and reorganising the upper parts of two adjoining properties, on the bend of a Victorian terrace in Shepherds Bush. The buildings had been carved up into a series of bedsits sometime between the 1960s and 1980s. 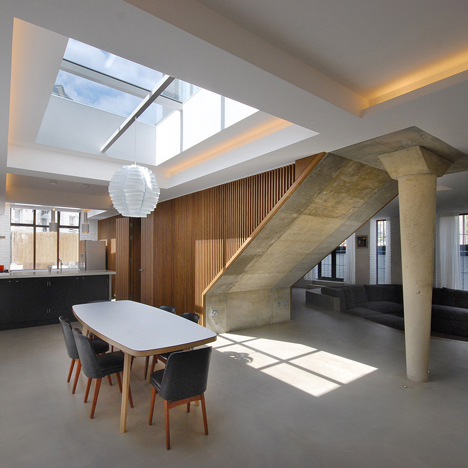 The architects extended the roof to create space for Apartment 009, which they describe as "creating a new home from the unused voids of existing houses."

"The project is an example of how the city can provide more housing on existing land with limited construction," explained the architects, who previously slotted a home between the party walls of two existing properties elsewhere in London.

The dormer roof extension has a lightweight timber frame and is faced in black-oiled cedar as a contrast to the tiled and pitched roofs of neighbouring properties.

A stairwell rises through the centre of this home, separating the kitchen from the living room.

Pale timber furniture has been built into its surrounding walls to provide a pantry for the kitchen, which has a grey-veined marble sink and countertop.

A bench also made from timber is integrated into the wall of the living room. A light arches over its top like a fishing rod, while to one side, a floor-to-ceiling window looks out over the back garden.

An extra storey was added to an existing extension at the rear of the property, creating a roof terrace for this apartment.

Glazed doors leads from both the living room and kitchen onto this white-painted balcony that sits in the crux at the rear of the two buildings.

Downstairs in Apartment 008, a set of freestanding furniture made from Douglas fir and white-washed ash frames new rooms while maintaining the Victorian proportions of the plan.

Sliding wooden doors were added to create a "fluid relationship" between the use of each space.

Bedrooms and bathrooms are separated into units that have been conceived as small buildings, with closets, desks and lighting built into their outer shell.

"The joinery is a spatial device, an interface that both connects and separates programmes," the architects explained.

An unornamented fir wood dado lines the lower half of the living room wall and blends into the pale floorboards, giving the room's furniture the appearance of sitting within a timber tray.

"Forming a material container, the Douglas fir allows furniture to contrast against the texture of the floor and wall," added the pair.

A study with a small brick balcony occupies the extension at the rear.