Gold-coloured tiles cover the walls of this extension to a school in London by architecture studio Hayhurst and Co, while its roofline stretches up to meet the gable end of an adjacent Victorian building (+ slideshow).

The remodelling and expansion by London-based Hayhurst and Co provides space for 210 additional pupils at the Whitehorse Manor Infant and Junior schools, which are operated by the Pegasus Academy Trust in Croydon, south London. 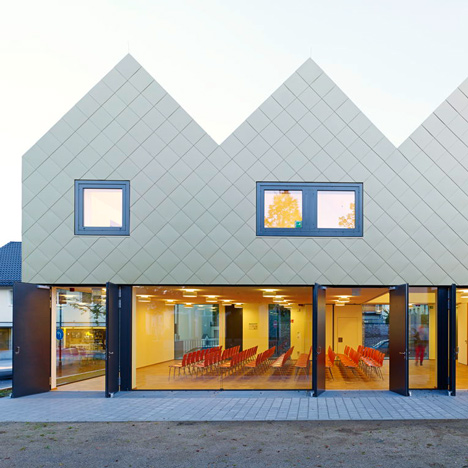 The school's existing site incorporated several Victorian buildings worth retaining and a conglomeration of more recent structures that needed to be renovated to unify and make better use of the available space.

Seven new and six remodelled classrooms, an enlarged assembly hall and a new administration hub are accommodated within the various interventions, which also aimed to improve the available outdoor play areas.

"By building over existing classrooms and reorganising the school's car park and playgrounds we managed to increase the amount of external play space for the children despite the new buildings," architect Nick Hayhurst told Dezeen.

To give the school's main public-facing facade a striking presence, the architects chose to tile the surfaces in a shiny metallic cladding called Tecu Gold, which is an alloy of copper and aluminium.

"We wanted to use gold to create a visible impact in the streetscape and offer a nod to the proud heritage of civic buildings in the immediate area," explained Hayhurst.

Throughout the site, the height and pitch of the new roofs change to reflect the different activities and ages accommodated within the buildings.

Described by the architects as a "responsive roofscape", the angular surfaces also reference the profiles of the original structures and create a sense of continuity between old and new.

"The roofscape is designed to bring together a fragmented site with a series of interventions and extensions that thread new teaching spaces through a complex arrangement of existing buildings," the architect added.

Nursery spaces feature multiple pitched roofs intended to give the interiors a more intimate scale while evoking the dormer windows of the Victorian school house.

The scale of the pitched roofs increases in accordance with the age of the pupils, so classrooms in the junior school have a more spacious feel than those in the infant school.

The remodelled section facing the street features an undulating roof that matches the pitches of the Victorian buildings at either end. Sloping surfaces draw the eye towards the historic gym hall and a shadow gap emphasises the transition between the structures.

A section at the centre of this reconfigured elevation has been opened up to incorporate a new entrance beneath a pergola inserted into its roof.

This new entrance leads through a courtyard towards a glazed reception area, on the other side of which is a playground flanked by the shingle-clad facades of new classrooms.

Skylights inserted into the slatted timber ceilings fill the classrooms and communal spaces with natural light, and built-in storage is incorporated throughout both the infant and junior schools.