Maison&Objet 2015: Canadian lighting brand Bocci has launched a light made by forcing molten glass into a loose heat-resistant fabric pillow.

Bocci's 73 pendant lamps have a cloud-like appearance, especially when hung in clusters, and a surface texture more reminiscent of fabric than glass.

An LED light source is positioned inside, creating a diffused glow through the material. 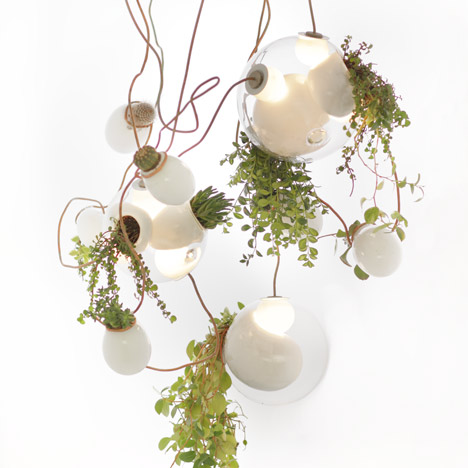 "There is a strange mystery that occurs when these pieces are filled with light," said Bocci creative director, Omer Arbel. "They become somehow evocative of more than both glass and fabric; they become something new entirely."

"The force of the glass blowing into the fabric makes it fold and form in unexpected ways, so every piece has its own character," Arbel told Dezeen.

"We are already exploring other manifestations and applications – specifically a suspension method that positions the pieces flat up against the ceiling, which I imagine will give the impression of an upwards motion, with the lights being contained, or caught by the ceiling," he added.

Bocci previously installed a giant chandelier of colourful glass spheres in the main hall of the V&A museum in London.