Diners are invited to imagine mid 20th-century Bombay at this restaurant in a former railway transit shed close to King's Cross station in London (+ slideshow).

Like the first two of Shamil and Kavi Thakrar's London restaurants, the third Dishoom pays homage to the Irani cafes that sprung up around Bombay – now Mumbai – during the first half of the 20th century. 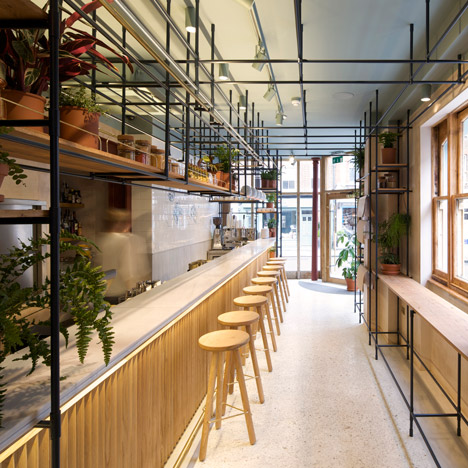 The Thakrars modelled the new restaurant on a "godown" – or warehouse – they imagined behind the Indian city's Victoria station. In their story, an Irani immigrant set up an makeshift stall there in the 1920s that grew into a popular cafe during the period of the Indian Independence Movement.

The aim was to recreate the atmosphere of that narrative in a section of warehouse behind Central Saint Martins art college, and to continue the legacy of the handful of these cafes that remain in Mumbai.

With the help of interiors studio Macaulay Sinclair, the cavernous space was broken up into a series of levels that create over 830 square metres of serving and dining space, for up to 250 covers.

"We looked at the space and thought about how we could break it up architecturally to make it more homely," Shamil Thakrar told Dezeen.

The building's original brickwork was retained where possible, while other walls that were previously painted white have been treated to look distressed.

A steel mezzanine was added to create more floor area, maintaining the sense of height and views of the pitched roof from the entrance, but also adding more intimate dining areas.

The new horizontal steelwork bridging the old structure and the new platform carries the services and provides the framework for suspended lights.

This upper level houses the open kitchen and a small amount of seating, with monochrome furniture matching the floor tiles.

Other original tile patterns taken from references in Mumbai are laid across the entrance level, where a book kiosk from the city's main rail terminus has been replicated and used to form a juice bar.

"To someone who grew up in Bombay, this would look weirdly familiar," said Thakrar. "There's an enormous amount of detail here."

Slogans and posters relating to the independence movement are written across the walls, accompanied by a collection of the Thakrars' black-and-white family photos.

The owners and the designers embarked on two trips to India to find inspiration and to source over 100 antiques to furnish the space with.

Items they brought back include a porcelain wash basin, room dividers and a pair of scales, which are carefully placed around the space. A replica of the clock that hangs in Victoria station is suspended above the staircase.

On the raised podium beneath the balcony, some of the restaurant chairs are made from repurposed second-class railway seats. Other furniture pieces hark back to Bombay's Art Deco heritage. "Bombay is the second most Deco city in the world after Miami," explained Thakrar.

Towards the back of the building, a double-height dining area for larger parties features an oval-shaped table surrounded by photographs depicting key moments in India's move away from British control.

This area is accessed by a corridor that wraps around the edge of the building, overlooking the floor below.

The basement, which formerly housed the building's stables, is now a bar called the Permit Room – a reference to the permit required to purchase and consume alcohol in Bombay.

Dark wooden furniture sits on the original cobbles, providing space for up to 92 drinkers to sample the selection of Bombay-influenced cocktails.

Photography is by John Carey.