News: two pavilions – one made out of broken umbrellas and bicycle wheels, and one constructed from materials used in oyster cultivation – are due to be installed this summer on Governors Island in New York.

The Billion Oyster Pavilion, by New York-based BanG Studio, and Organic Growth, by Spanish architect Izaskun Chinchilla, have been named joint winners in the fifth annual City of Dreams Pavilion Competition, which invited applicants to design temporary structures for the island south of Manhattan. 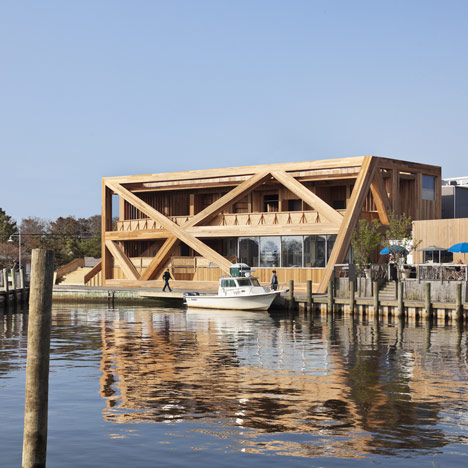 Izaskun Chinchilla, a tutor at the Bartlett School of Architecture in London, proposed a pavilion that will use discarded objects and materials to recreate forms commonly found in nature.

Reminiscent of both flowers and trees, the structure will comprise a canopy of branches made out of recycled materials, including old umbrellas, stools, damaged bicycle wheels and tripods. According to the architect, several institutions already recycle these items, so they should be easy to source.

At the end of the summer, these clusters of materials are envisioned for further reuse.

"Branches can be easily reused as sun, wind and rain protectors in windows, terraces or outdoor spaces all around the city. Bigger elements can be beautiful indoor chandeliers," said Chinchilla.

BanG Studio's proposal is for a structure built from some of the same materials that The New York Harbor School uses to cultivate oyster growth in New York's rivers and bays, from nylon rope and hose clamps, to perforated domed objects known as "reef balls".

When the pavilion is eventually dismantled, these materials will be donated to the school in support of its Billion Oyster Project – an initiative to restore one billion live oysters in New York's harbour over the next 20 years.

The competition was run by cultural organisation Figment, the AIA's Emerging New York Architects Committee and the Structural Engineers Association of New York.

The teams will now seek funding through donations and Kickstarter campaigns for construction costs. Pending planning approval, both are scheduled to complete before the start of the summer.

Governors Island first opened to the public in 2004 after nearly two centuries of use as a military base. The annual City of Dreams Pavilion series, which began in 2010, has also seen a cloud-like form made out of recycled plastic bottles built on the isle.