This machine by Dutch designer Jolene Carlier spurts popcorn from the end of a glass tube into a bright yellow bowl when the snack is ready to eat (+ movie).

Popcorn Monsoon is a machine consisting of a pair of conical-shaped yellow bowls set into an oval wooden base – one heats to pop the corn while the other collects it. A curving glass tube fixed to the larger of the two receptacles delivers the popped corn into the smaller bowl. 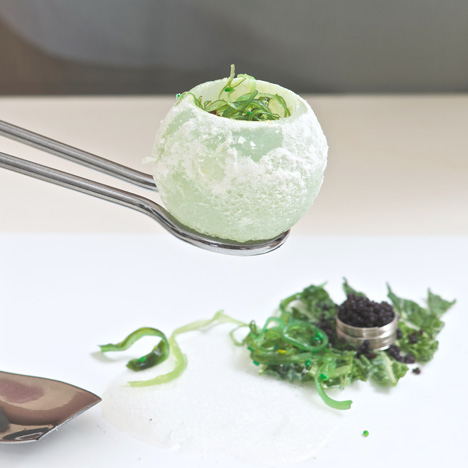 The popcorn machine is the materialisation of one of 120 colourful drawings created by Jolene Carlier for her final project from Design Academy Eindhoven.

It was also inspired by a quote from the 1971 film Willy Wonka and the Chocolate Factory: "Come with me, and you'll be in a world of pure imagination."

"The drawings with which this project started were made to create a world of pure imagination that still makes sense in this one," Carlier told Dezeen.

"Later on I find a function, one that fits but also surprises," she added, explaining how this process is intended to turn the popular adage "form follows function" on its head.

"Most popcorn machines are very dull though the simple process of making popcorn is exciting."

A small yellow ladle with angled sides is used to scoop kernels into a small glass funnel at one side of the machine.

A cork bung, which gives the apparatus a scientific appearance, blocks this exit route once the corn has been dispensed.

Hot air blown from beneath a grate in one of the two yellow basins pops the corn kernels and forces them up through the curved glass tube. The weight of the glass channel is supported at its crest by a metal hoop and rod affixed to the base.

The ready-to-eat popcorn falls into the second yellow bowl, which sits in a recess at the other end of the wooden stand.

"I considered making the glass tube more extreme or complicated but in the end decided the swirling of the popcorn was exciting enough," said the designer. "When I saw the magic of the floating popcorn it made me so happy."

Carlier has plans to convert further drawings into a range of products that will form a Pure Imagination collection, and is seeking to put the Popcorn Monsoon into production.

Film and photography is by Daantje Bons.