Austria-based Livin Studio has created a process to cultivate edible fungi that digests plastic as it grows (+ movie).

The aim of Livin Studio's project is to use commonly uneaten parts of fungi to break down plastic while simultaneously producing a novelty food product. 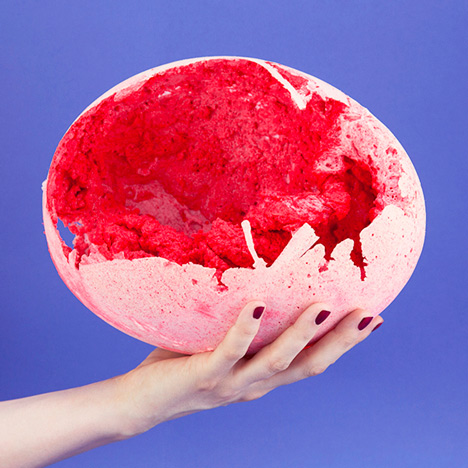 Johanna Schmeer imagines the future of food with Bioplastic Fantastic

First presented in Eindhoven last week, the Fungi Mutarium incubator was created as a prototype to grow the edible fungi around the plastic, breaking down and digesting the material as it develops.

Mycelium is the propagating part of a fungus and grows in masses of thread-like structures.

The cultures are grown within egg-shaped pods made from agar – a gelatinous substance derived from seaweed – to simulate the natural surfaces that the fungi traditionally grows on.

Plastic is placed within the pods along with diluted mycelium cultures – which are stored in a holding tank on one side and delivered into each agar case via a large pipette.

These cultures develop over the agar as they slowly digest the waste material, filling the space inside the pod.

While the process takes place, the pods are left in a "growth sphere" covered by transparent domed structure to regulate humidity levels. The plastic "food" for the fungi is sterilised with UV light in a compartment underneath.

"It can take several months until the plastic is fully digested by the fungi," said Unger, who has previously designed a table-top insect breeding farm for producing edible fly larvae at home.

"This is the part of the project that is still ongoing research. Our research partner [Utrecht University] expects that the digestion will go much quicker once processes are fully researched and optimised."

For the prototype, the domes are placed within a table top so they can be monitored and viewed.

"We imagined it as being used with a community or small farm setting," Unger told Dezeen. "Our setup with the two domes being placed in a table-like structure is more of a presentation setup. The domes can be separated, so that they can be easily replicated and placed on a shelf to be grown in masses."

Once the samples are fully grown, the agar pods (FU) and their contents are removed and ready to consume.

"Pleurotus varies from very mild to very strong, sometimes described as sweet with the smell of anise or liquorice," explained Unger, who worked with designer Julia Kaisinger on the project. "Texture and flavour depend a lot on the strain."

"Schizophyllum is known to have a rather tough texture, which is harder to acquire for Western cultures," she added. "We found the taste to be rather neutral."

The team came up with a recipe to create flavoured FU, which can then be used with other ingredients as part of a meal once fully developed.

For eating the produce, they also designed a range of specialised cutlery items. The Moon Spoon allows the user to scrape the tiny fungi from the FU, while the Round Chops are used like chopsticks to pass the pods from one diner to another.

The Hollknife has a tube through its centre, so it can cut up the soft shell and act as a straw to suck up the contents.

The cutlery designs were received so well by members of the public that they plan to launch a Kickstarter campaign to fund their production early next year.

"Initially, the cutlery was specifically designed to eat the fungi with it," said Unger. "However, we got great feedback on the cutlery and we find that it can be used with common food culture today as well."

The utensils will eventually be produced in metal or ceramics, but currently exist as plastic prototypes.

Photography is by Paris Tsitsos.