I/O Architects raised one corner of this house in Bulgaria, creating a stepped veranda that stretches along the all-glazed facade (+ slideshow).

Named Slight Slope Long House after both its shape and its site, the long narrow residence is the home of a young couple in Targovishte, a city in north-east Bulgaria. 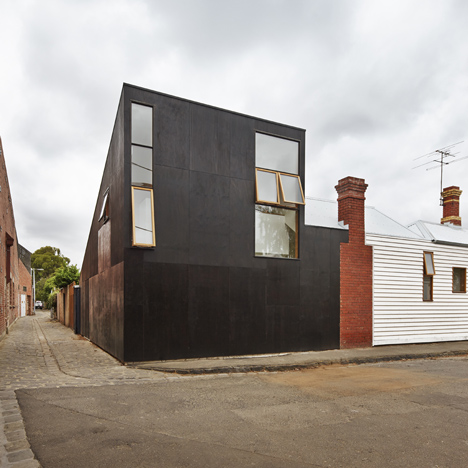 The 672-square-metre house is mostly planned over one storey, but the natural slope of the site allowed I/O Architects to lift up one end of the floorplate and slot a generously-sized garage underneath.

This slope is highlighted by the veranda that spans the house's glazed south-facing wall. At first it gradually steps down to follow the gentle slope of the landscape, but about two-thirds of the way along it starts to rise again to create informal seating.

"The topography of the park environment around the house resembles a cavea of an amphitheater," said architect Georgi Katov, referencing the seating sections of Roman theatres.

Inside, the main storey is divided into four levels, each connected by a small set of stairs. Rooms are organised so that living spaces occupy the lowest levels, and the bedrooms are lifted slightly above ground for privacy.

"The biggest challenge was to procure privacy in the large structure," added the I/O Architects co-founder. "The height of the spaces changes in relation to their grade of privacy."

The house has walls of locally quarried Rhyolith stone, designed to give the building a sense of "massiveness". Glazing sits within large recesses, and some timber surfaces have been added inside and out.

The main entrance sits alongside the garage at the lowest level level of the site. Inside, stairs lead up to a small entrance lobby at the front of the large open-plan living space.

The master bedroom is located at the western end of the building and is accessed though a study, while two guest bedrooms can be found at the eastern end of the house beyond a small secluded courtyard.

Photography is by Assen Emilov.