The Vigour project is a collaboration between Dutch designer Pauline van Dongen, the TextielMuseum in Tillburg, and her fellow PhD candidate at Eindhoven University of Technology, Martijn ten Bhömer. It aims to help geriatric patients and their carers understand their range of movement during daily life, enabling rehabilitation without the need for intrusive devices. 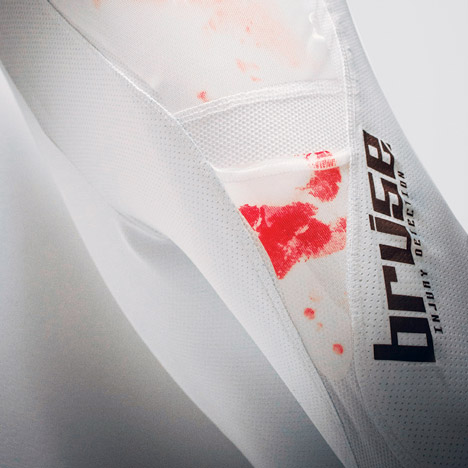 Bruise suit shows para-athletes where they are injured

"The technology becomes invisible," said Van Dongen in a video about the project's development. "It's more about the feeling and the touch of the design – the patient doesn't really need to worry about what's happening on the inside."

Sensors made from a soft conductive yarn are concealed beneath the knitted surface. They detect how well the wearer is able to perform particular movements by extending and contracting like elastic, with the data collected via a tiny circuit board.

Information collected from the sensors is sent wirelessly to an application installed on a tablet.

The cardigan was chosen as an appropriate garment for its comfort and ability to accommodate the sensors in raised panels while retaining a stylish appearance and sufficient flexibility.

"On the back of the wearer, on the height of the neck, there is a separate 3D-printed casing that contains a battery and the Bluetooth Low Energy transmitter," said Ten Bhömer, who has previously made a suit that purifies polluted air surrounding the wearer.

"Every sensor area is combined with a custom-made PCB [printed circuit board] that can measure the signal of the stretch sensor and transmits this signal to the Bluetooth transmitter. All the electronics are encased in custom 3D printed casings and have connectors to remove them before washing," he explained.

The garment can be worn as part of a normal outfit to gather data during the day, or used during rehabilitation sessions to provide the physiotherapist with details of the patient's progress.

During physiotherapy the sensors measure the speed with which actions are performed, whether they are executed correctly, and if the degree of stretch is improving.

Feedback is provided through graphics displayed on the tablet's screen and by sounds that alter in pitch or tempo depending on the amount of movement achieved.

The visual and audio prompts make it easier for the wearer to understand their progress without relying on complex charts or medical jargon.