News: Bjarke Ingel's firm has unveiled plans for a recycling facility in Copenhagen, encased within a manmade hill that could double as a running track, picnic area or even a snowboarding slope (+ slideshow).

BIG was commissioned by waste management company Amagerforbrænding to create the 1,200-square-metre recycling centre at Sydhavns, the city's southern port. 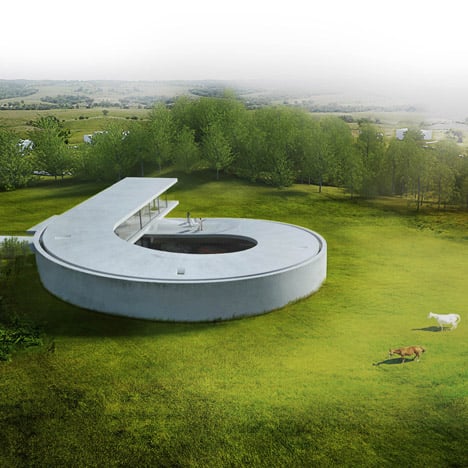 Conceived as "a public space rather than a piece of infrastructure", the Sydhavns Recycling Center is designed as an artificial hill with recycling facilities in its centre and a grassy park over its top.

"As a society, our investment in waste management often ends up as utilitarian facilities of concrete boxes that constitute grey areas on our city maps," explained BIG in a statement. "What if they could become attractive and lively urban spaces in the neighbourhoods they form part of?"

A sunken figure-of-eight at the centre of the hill will create two banks of recycling bins, laid out as a pair of roundabouts.

A tunnel-like opening at the north-east corner of the site will function as an entrance and exit for vehicles, allowing drivers to circumnavigate the entire space.

"In its simplest form the recycling station is a way to start thinking of our cities as integrated man-made ecosystems, where we don't distinguish between the front and back of house," said the firm.

These areas will be concealed by the surrounding grassy banks, where BIG plans to create fitness areas, viewpoints and picnic spaces, as well as a pathway overlooking the activities below.

"From the ridge of the crater, curious citizens can look into the recycling square and learn about the journey of recycled materials graphically illustrated on the inside of the crater wall," added BIG.

One proposal image also show visitors snowboarding on the building.

The project is set to start on site later this year, and completion is pencilled in for 2016.

BIG is also working with Amagerforbrænding on a much larger project – the replacement of a 40-year-old waste incineration plant with a structure that will blow smoke rings and feature a ski slope on its roof.

Speaking to Dezeen last year, Bjarke Ingels said the project will "transform people's perceptions" about public utility buildings. "Right now you can say it's a science-fiction idea to have a power plant with smoke rings and ski slopes, but in three years they will skis on their power plants in Denmark."

Sydhavns Recycling Center is one of four projects that BIG added to its website last week, including a loop-shaped country house that features a gallery for showcasing the clients' car collection.