News: a proposal to carve a cultural centre out of the landscape has won the UNESCO design contest for a Bamiyan Valley site where two seventh-century statues of Buddha were destroyed by Taliban militants.

UNESCO named an Argentina-based team led by architect Carlos Nahuel Recabarren as the winner of the competition, which asked entrants to design a building for the edge of a valley in the central highlands of Afghanistan – a key Buddhist site on the ancient Silk Road trading route.

The proposal, named Descriptive Memory: The Eternal Presence of Absence, envisions a public park that extends out to the meet the rooftops of a sunken building complex. These structures will surround a public plaza with a reflective pool on one side. 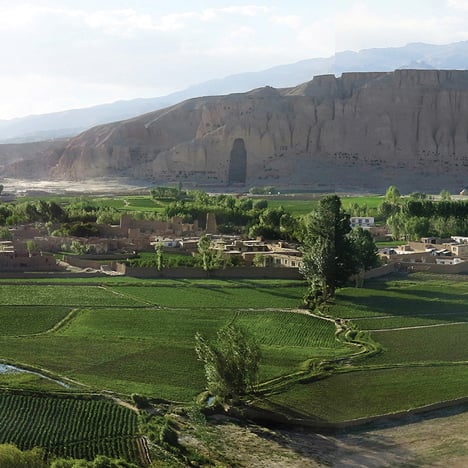 "Our proposal tries to create not an object-building but rather a meeting place; a system of negative spaces where the impressive landscape of the Buddha Cliffs intertwine with the rich cultural activity that the centre will foster," said the team in a statement.

"The Bamiyan Cultural Centre then is not a built but rather 'found' or 'discovered' by carving it out of the ground. This primordial architectural strategy creates a minimal impact building that fully integrates into the landscape, takes advantage of thermal inertia and insulation of the ground, and gives a nod to the ancient local building traditions."

The foothills of the cliffs along the valley feature several caves dating from between the third and fifth century, which were used as Buddhist monasteries, chapels and sanctuaries. The cliffs themselves once housed two giant seventh-century carvings of Buddha, standing at 55 metres and 35 metres high, but these were destroyed by Taliban forces in 2001.

Following an intervention to prevent an unauthorised team of German archaeologists from reconstructing the statues, UNESCO teamed up with the Afghan government's Ministry of Information and Culture to launch a competition for a new building on the site at the end of 2014.

Described by the heritage organisation as a "cornerstone" in the nation's efforts to preserve its culture and promote peace, the project called for an archive of archaeological and traditional artefacts, as well as space for cultural programmes and research facilities.

The winning design was anonymously selected from 1,070 proposals by a jury of seven experts, including Architecture for Humanity co-founder Cameron Sinclair and the Cooper Union's acting dean Elizabeth O'Donnell. The jury praised the concept for its well-conceived plan, sensitive site strategy, choice of brick as building material, elegant curving passageways, and appropriate consideration of scale.

With financial support from the Republic of Korea, the project will immediately move towards construction on a budget of $2.5 million (£1.6 million).

In connection, the Afghan government plans to launch a national programme to support cultural diversity, which will include a nationwide archaeological survey and targeted activities to safeguard minority rights across the country.

"This competition was an opportunity to create a new pattern for architecture, design and cultural development in Afghanistan," said Paolo Fontani, director of UNESCO's Afghanistan office. "It is one of our objectives to make sure that the Afghan people recognise themselves in the design concept."

An online petition has since been launched against the "unfair and unprofessional" choice of winner by architect Kia Massoudi, believed to be one of the unsuccessful competition entrants. He claims that the winning project and runners up "neglect many points and criteria mentioned in the brief".

"Many criterion and important facts have been neglected and ignored by the jury members, and their final decision shocked most of us, as professionals," said Massoudi.

So far the petition has 70 signatures.