News: plans to recreate the Crystal Palace exhibition hall in south London have been shelved, despite attracting a shortlist of architects including Zaha Hadid, Richard Rogers and David Chipperfield.

The scheme to build a new exhibition venue inside the 80-hectare Crystal Palace Park has been halted by Bromley Council, the local authority that owns the site. 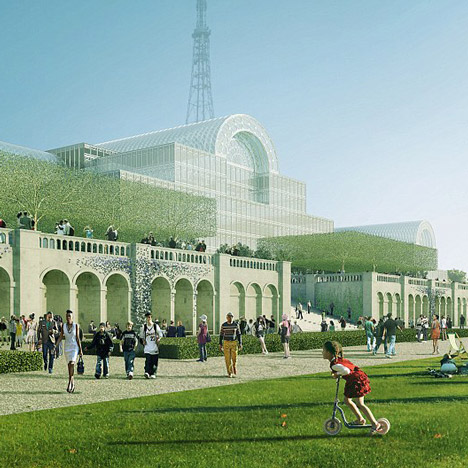 Funded by Chinese developer ZhongRong Group, the new Crystal Palace building was intended to replicate the "spirit, scale and magnificence" of the iron, glass and steel structure built by English architect Joseph Paxton to host the Great Exhibition of 1851 and destroyed by fire in 1936.

But the council has now issued a statement effectively scrapping its partnership with ZhongRong Group.

Bromley had agreed a 16-month exclusivity contract with ZhongRong Group to develop plans for the site, and had offered to extend the arrangement if the developer agreed to "financial and business planning-related conditions".

Bromley Council said that ZhongRong Group had failed to respond within the time limit and that there was now no "realistic prospect of reaching an agreement" to continue the project.

"There is a major opportunity here to do something that might really improve the park and provide much needed regeneration locally too," said Bromley Council leader Stephen Carr. "This was why we were prepared to properly listen to what ZhongRong had to say but we were never going to simply say yes to absolutely anything as we need to get this right."

The scheme was the centrepiece for a wider plan to overhaul the Victorian park, which includes a popular outdoor exhibition of model dinosaurs dating from 1854 that were granted Grade I-listed status in 2007.

"We will meet with community stakeholders as we have done all the way along this process to review options going forwards," said Carr. "Importantly too, we are continuing to progress plans to improve Crystal Palace Park with an investment in excess of £2 million."

ZhongRong Group announced its plans to develop the project in October 2013, and launched a competition to design the events venue, with a jury chaired by London Mayor Boris Johnson.

"The rebuild of the Crystal Palace is set to produce an extraordinary new landmark for the capital, which will support the rebirth of this historic park and catalyse jobs and growth in the local area," said Johnson.

Hadid, Rogers and Chipperfield were shortlisted in February 2014, alongside Grimshaw, Haworth Tompkins and Marks Barfield. Three of the shortlisted firms were set to be invited to develop their schemes further and construction was expected to begin later this year.

The plans were opposed by a number of leading critics, including Dezeen's Sam Jacob who described the scheme as "zombie architecture".

"The Crystal Palace functions perfectly well in its absence (perhaps even more so than if it were still here),"  said Jacob. "Its return as a ghost, zombie or otherwise undead form of architecture should be seen for what it is: a ghoulish pull on our tender heartstrings in the service of large-scale development."

Questions were also raised over the decision to allow a private developer to build on publicly owned land in one of London's most popular parks.

Bromley Council did not confirm if it would be pursuing development plans with another partner.