Disused materials including tyres, burlap sacks and rope are recycled into footwear for the developing world in this project by Ravensbourne university students (+ slideshow).

Soled is a project by product design students Jena Kitley, Alani Fadzil and Lauren Joseph, who worked together to come up with a solution for an issue they identified in the developing world. 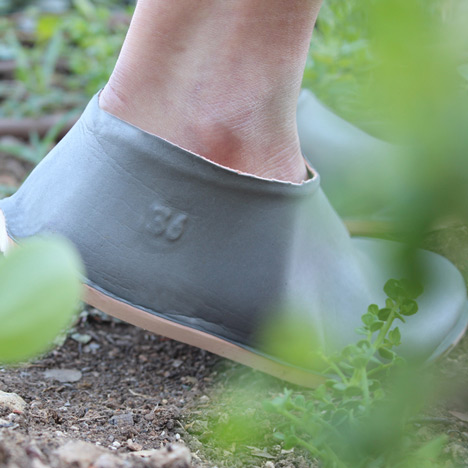 "We completed a collaborative project that involved creating a template for people in less developed countries to make their own footwear using local materials available to them," Kitley told Dezeen.

The trio chose to focus on Rwanda, which is one of the smallest but most densely populated countries in Africa.

Through their research, they found that a lack of footwear was leading to the spread of diseases caught through the feet.

As a solution, the students devised a method that Rwandans could use to create their own footwear from widely available materials.

"Rwanda has an abundance of tyres, a durable, flexible, waterproof material, which was suitable to be used for the sole of the shoe," said Kitley. "Burlap sacks – used to import and export their produce – and hemp rope were other accessible materials that would be used to complete the footwear."

Using a template made from recyclable polypropylene, individuals can identify their shoe size by lining a foot up with the markings.

Once the rubber tread is stripped from the tyres, the guide is placed on top of the material so the user can cut out the correct shape at the right size.

"The template would be sent out and distributed through a charity, the concept is open source and has the ability to be transferred online as well as being a physical product," Kitley said.

Step-by-step illustrations show how to bend the rubber sole into shape, then attach a burlap ankle strap using the rope to sew the shoe together.

The designers suggest that volunteer workers could initially teach local people how to create the footwear, in the hope that the knowledge would be passed through communities.

"There are unlimited possibilities as to the materials they could use," said Kitley. "The tyres, burlap sacks and hemp rope are just a starting point, they can alter the design and materials to their own preference."

Other designers investigating ways to reuse materials for footwear include Elisa van Joolen, who takes leftover sample trainers and turns them inside-out to create new shoes.