Stockholm 2015: design studio Färg & Blanche has launched a collection of upholstered stools for Gärsnäs, the Swedish furniture brand that already produces its Emma and Emily chairs.

Named after two dogs that frequent the Gärsnäs showroom, the Elsa and Jack stools are upholstered in fabric or leather and have solid ash legs. 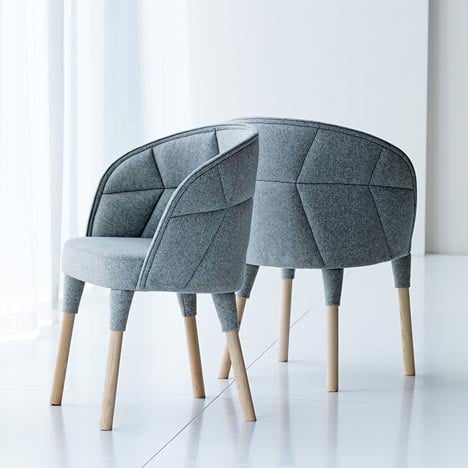 "We wanted to create small friends for Emma and Emily," said the studio's founders Frederik Färg and Emma Marga Blanche. "When we began sketching Jack and Elsa, it seemed obvious that a stool supplementing our Emma Series must have an idiom and a life of its own."

Jack is the larger of the two designs – large enough to seat two or three people – while Elsa only has space for one.

"Stools can play many different parts in an interior design, singly or like a flock of animals spread out across the room," said the designers.

"Their organic shape allows them to be placed in a more messy way, for example in a public space you don't need to have them all lined up," they continued. "They can live their own life wherever people leave them."

Färg & Blanche launched the Emily chair last year as a smaller version of the Emma armchair unveiled the year before. Both feature quilted upholstered backrests and rounded wooden legs.

The new stools are visually linked to the chairs by the sleeves of material that cover the top portions of the legs.

"The stockinged leg detail comes from Emma and Emily, we wanted them to have a family lookalike feeling," Blanche told Dezeen. "This is the small detail that gives them their identity, a way to dress them."

Designed and made in Sweden, Elsa and Jack were presented at the Stockholm Furniture Fair last month on the Gärsnäs stand – also designed by Färg & Blanche. The duo also revealed a chair with a metal frame shaped like trouser braces in Stockholm.