A set of stacked terracotta planters, colourful geometric hand-held mirrors and ombre-glazed vases are among the homeware products included in the debut collection by Canadian design duo MPGMB (+ slideshow).

The ceramic, stoneware and wooden accessories were created by MPGMB, a Montréal design studio formed by industrial designers Marie-Pier Guilmain and Maud Beauchamp in 2013. 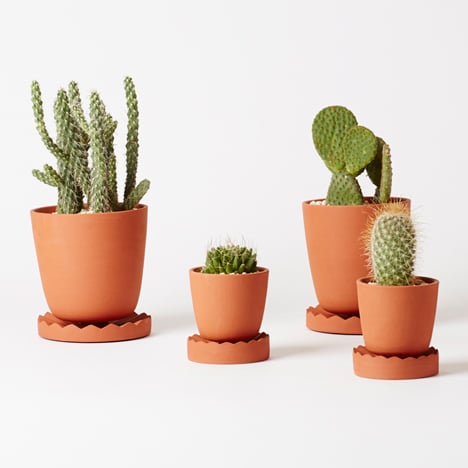 Anderssen & Voll creates a collection of tools for indoor gardening

The first in the series of new homeware products is the Arizona Stoneware Collection, a set of terracotta planters and vases specifically designed for succulents and cacti.

According to the designers, the colouring and shape of the textured pots references forms found in the desert landscapes of Arizona and Utah – particularly the sandstone plateaus of Monument Valley.

"All this started with our personal love and obsession with succulents and cacti," Beauchamp told Dezeen. "Our starting point for inspiration was the Arizona landscape as our conception of Arizona was one of a cactus paradise – we've not been to Arizona, yet!"

The pieces are composed of a series of conjoined rounded, ribbed and straight-edged forms.

Taller vases are designed to hold cut stems, while more squat pots are intended for plants and simple shallow dishes can be used to create miniature rockeries. The range is produced in three finishes – terracotta, and black or white glazed.

Fin-like stands can be used to the support the base of the round-bottomed pots.

"We drew a lot of shapes and tended to like the ones that were more geometric, almost mechanical," said Beauchamp. "I guess we can't escape our industrial design background."

The vases and planters are hand-thrown by Montréal-based potter Christian Roy. "He has this amazing ability to bring our sketches to life pretty quickly and with sensibility for the details," added Beauchamp. "We refined the shapes as he was throwing them in front of us, a very fun and spontaneous process."

The studio has also designed Hand Mirrors, a collection of hand-held vanity mirrors with geometric frames and elongated handles. The oval, circular and hexagonal frames are made from CNC-cut wood fibre and tinted in a variety of grey, blue and green stains. The studio is currently working on a range of geometric trays to accompany the mirrors.

A set of small green and pink glazed containers with domed lids are called Ombre Vases. Vibrant pink and green glazes applied to the top or bottom of each piece fade out along the body of the vase into a more muted colour.

The pieces were produced during a four-month residency in China and are influenced by the popular green and pink finishes used to decorate artificial flowers.

"We were staying in the middle of a small neighbourhood called The Sculpture Factory in Jingdezhen," Beauchamp told Dezeen. "I was working daily with many artisans who owned little studios specialised in one aspect of porcelain production: model makers, mould makers, slip casters, throw masters, glaze masters."

"I wanted to use two colours that artisans in Jingdezhen use a lot on traditional porcelain flowers and see how these colours could translate on a modern shape,"  she added.

Photography is by Daphné Caron.