London's Royal College of Art has been hit by more senior staff changes, with Ab Rogers (above) stepping down as head of the Interior Design programme, Clare Johnston retiring as head of Textiles and Jeremy Myerson departing as head of research institute the Helen Hamlyn Centre for Design.

The announcements follow last week's news that Anthony Dunne and Fiona Raby are stepping away from their teaching positions on the Design Interactions course. 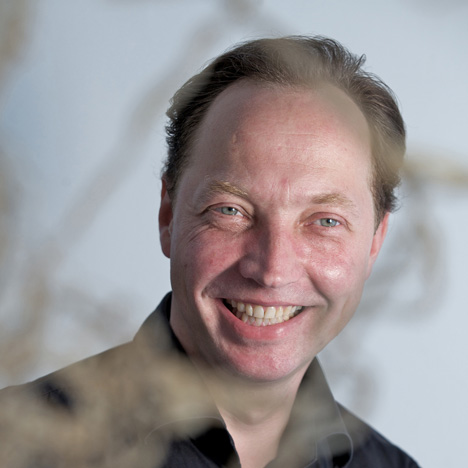 Myserson said the school was witnessing a "changing of the guard" but denied that the departures were related.

"There's quite a few people leaving the RCA but I think we are leaving for slightly different reasons," he told Dezeen. "It's a generational thing. There's a changing of the guard at the RCA and that's no bad thing."

There have been grumbles recently from staff and students about the changing culture at the college, which has traditionally championed experimental design but has been forced to become more business-like due to cuts in state funding.

"Higher education is now a very, very tough business," said Myserson, who headed the RCA's inclusive design research institute for 16 years . "The college has gone from having a high degree of state funding to having to be more reliant on other sources of income."

"That hasn't affected the Helen Hamlyn Centre because we have always had to rely on commercial funding and we have always gone out and got money from industry," he added. "So in a sense we've been piloting the more entrepreneurial culture that the rest of the RCA is catching up with."

A spokesperson from the RCA said the announcements were "natural movement" in a specialist sector, and that a number of staff would remain associated with the college in different roles. Rogers will be a visiting professor, Johnston will become an emeritus professor, and Myserson will oversee Phd students in a part-time role.

"The only one who's moving on for now is Tony Dunne, who's been here since 1991 and head of programme for the past decade," the spokesperson added.

Student numbers at the college are increasing, the spokesperson said, but investment in new staff means the staff-to-student ratio will remain the same.

"Having had several years with a lower than average staff turnover, we now have a year where we see a number of staff who are due to retire or decide to move on," said the spokesperson. "It happens like that."

The departure of Dunne and Raby was announced last week, with figures from the design world paying tribute to the way their Design Interactions course had influenced contemporary design culture.

"They have seriously changed the course of design," said MoMA senior curator Paola Antonelli. "I do not think that in the future designers will accept to be called simply 'problem-solvers'. Their job will be to frame the best questions and help us all provide answers. Tony and Fiona are superstars."

A few days later the college announced that Clare Johnston, who heads the textiles department, is to retire at the end of the academic year. Myerson's departure was announced the same day.

News of Ab Rogers' departure came yesterday. The designer said that his reason for leaving was to focus on his London-based studio Ab Rogers Design, whose clients include Condé Nast, Comme des Garçons and Price Waterhouse Cooper.

His team has also designed exhibitions for the Tate Modern, Barbican, Science Museum and the V&A in London, as well as multiple museums and galleries abroad, and completed a host of residential and hospitality projects.

"My design practice has become increasingly demanding in recent years," said Rogers. "Sadly I have had to make a choice between the studio and the college."

Rogers joined the RCA to set up the Interior Design programme in 2012, which sits within the college's architecture department, led by Alex de Rijke. He will continue to participate as a visiting professor.

"I am very pleased that although Ab is in demand and has had to focus on his business, RCA students will continue to benefit from his involvement and inspiring creative vision as a visiting professor," said the RCA's rector, Paul Thompson.

The college, which was founded in 1837 as the Government School of Design, is one of the world's most influential postgraduate-level institutions devoted to art and design disciplines. It offers Masters, Phd and MPhil programmes in subjects including fine art, design and communication.

Other recent changes at the college have included the departure of Tord Boontje as head of Design Products in September 2013. Boontje, who inherited the course from Ron Arad in 2009, was eventually replaced by academic Sharon Baurley.

Last year, students from the Design Products course posted an anonymous open letter around the RCA's buildings, stating that they were "deeply concerned and frustrated with the evident and undesirable deterioration of education" at the institution.

The letter said that the abrupt departure of tutors, a lack of space and equipment, and increasing student numbers and fees were among the issues directly affecting existing students.