Aerodynamic seed pods and a methane-catching cow muzzle are among the winning projects of the inaugural Terra Carta Design Lab competition, run by The Prince of Wales and former Apple designer Jony Ive.

The four winning projects were selected from 125 submissions and will each receive £50,000 in funding alongside personal mentorship from Ive, who is known for designing some of Apple's most iconic products, including the iPhone.

He is also the co-founder of design firm LoveFrom.

"I find it reassuring, particularly facing the overwhelming challenge of climate change, that we can all contribute ideas that could evolve into valuable solutions," Ive said.

"The ingenuity and determination of these designers has produced some extraordinarily creative responses, and they now embark on the journey to turn these great ideas into practical solutions."

One of the winning projects is a device that can be attached to the wheels of a car to capture the unseen plastic particles released by tyres as they wear down.

Developed by a group of students called The Tyre Collective, the device can help to tackle the second largest source of microplastics in our environment after single-use plastics.

"We want to challenge existing models of business and design, and envision ones focused on circularity and responsibility," co-founder Hanson Cheng told Dezeen.

"We are speaking to tyre recycling companies and developing applications for tyre wear, including reintroducing this micro rubber into new tyre production and upcycling it into footwear outsoles and carbon black, a pigment used to create inks."

Another emission-capturing device to win the competition is the Zelp muzzle, which is worn by cows to catch their methane-heavy burps and turn them into water vapour and carbon dioxide.

As methane is a much more potent greenhouse gas than CO2 in the short-term, with an 84 to 86-times higher warming power over a 20-year period, inventor Francisco Norris claims this could help to reduce the climate impact of the livestock industry overall. 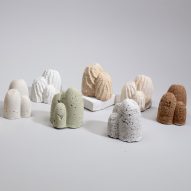 Twin sisters Begum and Bike Ayaskan's aerodynamic Aerseed pods were designed to help the reforestation and restoration of natural ecosystems that have been degraded through human activity.

Made from food waste and filled with seeds and nutrients, they can be carried by the wind over great distances and difficult terrains, much like dandelions disperse their windborne seeds.

The final winner is Amphitex, a breathable waterproof textile developed by the team behind start-up Amphibio for the outdoor clothing industry.

These kinds of textiles traditionally rely on several layers of different plastics and harmful chemical coatings for their performance, making them impossible to recycle.

But Amphibio has developed a way to create the multi-layered textile using only one material and no chemicals, meaning it can form part of a closed-loop system rather than inevitably ending up as waste.

The Terra Carta Design Lab also named two highly commended projects – a compostable packaging material called Shellworks that is made by microbes, and Orbital Bloom, a data-driven artwork that reveals whether companies are adhering to their sustainability and decarbonisation targets.

Both projects will receive £10,000 in funding and mentorship from InnovationRCA, the RCA’s centre for entrepreneurship and business support.

The jury for the inaugural competition included Ive and Prince Charles, alongside representatives from its three headline sponsors – Bank of America, Amazon's Climate Pledge and renewable energy provider Octopus.

Other projects that were shortlisted for the competition include the Resting Reef urns, which can help to regenerate dwindling oyster reefs while offering a meaningful resting place to the deceased.