Called The One, the 318-metre-tall tower will have a glass facade with a diamond pattern of bronze struts running up the sides, and will occupy a site in downtown Toronto on the corner of Yonge Street and Bloor Street. 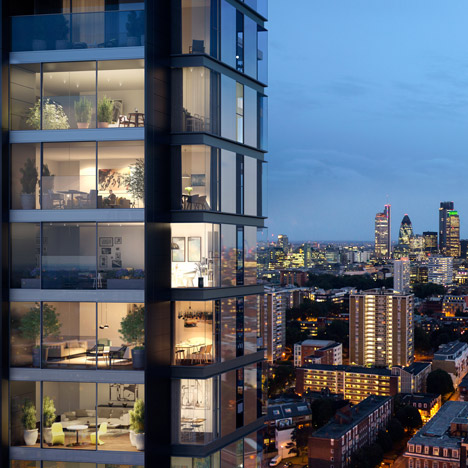 It could become the second tallest structure in Canada, after the 553-metre-tall CN Tower telecommunications and observation spire, and the tallest habitable building.

The One was unveiled by developer Sam Mizrahi at a community meeting last night. It will be built on a site formerly occupied by the 114-year-old Stollerys building, which Mizrahi controversially demolished in January.

Mizrahi said the building could be completed by 2018, but the design has not yet been approved by local officials.

Foster + Partners has previously proposed an even taller pair of towers with faceted facades for Toronto as part of the multibillion-dollar redevelopment of the Metro Toronto Convention Centre, but there is currently no start date confirmed for that project.

The firm is working with local studio Core Architects on The One, and described the building as "a new model of vertical retail in the city."

Nine levels of shops, cafes and restaurants will occupy the base of the building, with apartments taking up the bulk of the structure. These will be reached via an internal glass bridge on the 12th floor.

The building will be connected to Toronto's underground network of shops and pedestrian tunnels, PATH, which residents can use to navigate the downtown district during the extremely cold winter months.

"A flexible 'urban room' is elevated two storeys above the street, protected from the weather and accessed by two express escalators," said the firm.

"In contrast to the typical glass residential tower with shallow balconies, the facade is characterised by warm metallic tones and a distinctive bronze exoskeleton frame, which transforms as the tower rises to articulate the change in function."

Other high-rise designs recently unveiled by the firm include a twin-towered residential development in London that has one bicycle parking space per bedroom.