The zigzagging rooflines, handmade-brick walls and golden balconies of these Greater London housing blocks by Duggan Morris Architects are all references to the canalside setting (+ slideshow).

Duggan Morris was one of three firms chosen to design the first-phase buildings of the Brentford Lock West masterplan – a project to create 520 homes on a former industrial estate next to the Grand Union Canal on the outskirts of west London.

The brief called for 45 low-cost residential units and a strong visual relationship with the waterfront setting. The challenge was to mediate between the surroundings, which vary from the village-like buildings of a nearby conservation area to a series of industrial warehouses to the north. There are also several narrowboats moored nearby. 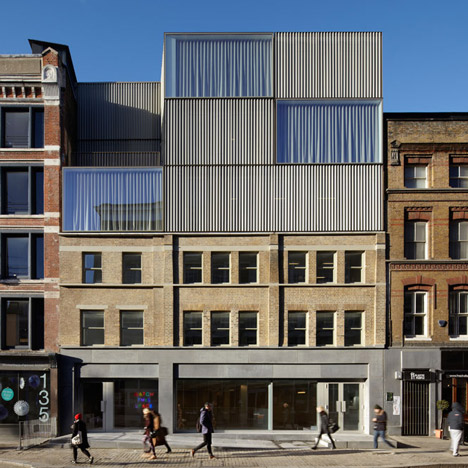 The site – known as Block G – was divided up into two halves to create a pair of five-storey buildings. Both feature gabled rooflines that create a zigzagging profile.

"The buildings are conceived as cranked blocks following a meandering neighbourhood street held together by a large base plinth," explained architect Joe Morris.

"The roof structure evokes the forms of the nearby waterside sheds with their series of inverted pitched roofs," he said. "Each block is divided into three bays; this articulation breaks the overall massing of the two blocks resulting in a stronger spatial experience."

Both buildings have a concrete framework, but the predominant facade material is brick. A handmade variety by West Sussex manufacturer Freshfield Lane was selected, offering hues of red, brown and blue.

Upright brick courses run between the tall narrow windows, creating subtle horizontal stripes that resonate with the uprights of the powder-coated steel balconies.

"The lightness and fragility of the industrial sheds suggested the potential for a rich and varied language, with varying scales and appearance," said Morris.

Four or five apartments occupy the floors of each block, and every home has at least one balcony. The majority of these face out over the water.

According to project architect Miranda MacLaren, all three firms worked on their plot separately but there was a collaborative approach to deliver a cohesive whole.

"There was no particular lead on the design, they all naturally compliment one another," she told Dezeen.

The next phase of the masterplan – which was drawn up by Swedish urban designers Tovatt, Klas Tham and Urbed – is now moving forward and will include 141 homes designed by west London studio Mae.