Toogood used metal framework and mesh panels to mark out linear spaces on two floors of the Oxford Street store for the new Agender initiative – an experiment to provoke conversation about gender targeting in fashion and retail. 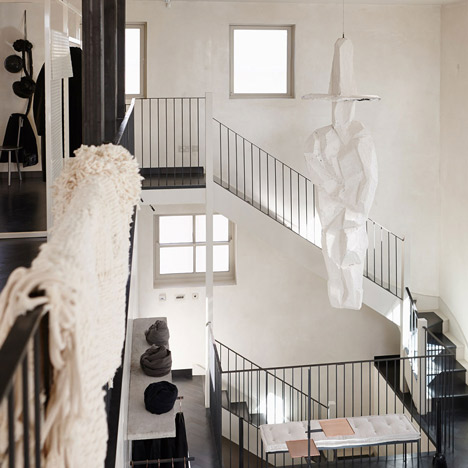 Fashion, beauty and lifestyle products in the dedicated areas are stripped of all branding.

Meanwhile, clothing and accessories from over 40 brands are stored and displayed in plain garment bags and brown boxes, to "democratise" the merchandise and remove any indication of their target gender.

"In the 21st century we're increasingly aware that gender is not a binary, and the way we choose to present ourselves as individuals shouldn't be constrained by the artificial divisions of society or commerce," said Toogood.

Masking tape is used to create text and replace logos, and products are all labelled using the same tags.

"I chose to give the space the feel of an archive to reflect the curatorial decisions that go into any fashion edit," Toogood said. "By removing branding, gender differences and merchandising, we allow the garments to speak for themselves."

On the first floor, materials such as vulcanised rubber and latex are used in a warm pink palette within the lighter of the two areas – which is occupied by abstract sculptures.

Horsehair, steel and concrete create a darker environment on the level above, though both areas feature the same metal rails and tube lighting.

"The materials used in the Agender houses – concrete, horsehair, rubber – have a primal, raw feel," said Toogood. "It's about trying to pare back the superficial layers of polish and branding, and by doing so reveal something that is innate."

As part of the campaign, all of the mannequins have been removed from Selfridges' windows for the first time in the history of the store, which was founded in 1909 by Harry Gordon Selfridge and is one of the UK's largest department stores.

Instead, gender-ambiguous garments are draped over straps, stacked against poles and hung from furniture pieces.

"Through Agender, we've changed the context of shopping in store and online; by removing gender codes, our shoppers will be free to make choices based purely on personal taste," said Selfridges creative director Linda Hewson.

Faye Toogood's previous retail interiors include a London boutique that looks like a nightclub, and a Dubai fashion store that pairs raw concrete and colourful fabrics.