New York architect Thomas Phifer has designed a building featuring an opaque glass exterior for one of the world's most important glass museums (+ slideshow).

The fourth wing of the Corning Museum of Glass, in Steuben County, New York, opens this week. It provides a dedicated 9,000-square-metre exhibition space for contemporary glass – the largest of its kind in the world, according to the museum.

Thomas Phifer – whose firm has also recently completed the Salt Lake City courthouse and the architecture college at Clemson University – conceived the building as an evolution of the typical white-cube gallery. He describes it as "a vitrine".

Its exterior is a rectilinear glass-clad structure that offers whitened reflections of its surroundings, while inside it contains five new galleries, each bounded by curvy white walls and filled with daylight. This is a contrast to most museums, that restrict light to preserve the exhibits.

"We realised that we were beginning to investigate an experience that was different from the way we traditionally thought about museums," said the architect, explaining his starting point for the design. "Contemporary glass is not harmed by the quantity of light."

"Inspired by the image of walking into a white cloud, we designed a collection of spaces defined by soft curving walls that dissolve the separation between the art, atmosphere, light and space," he said. 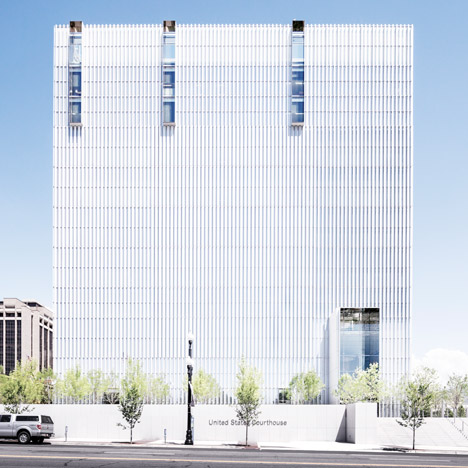 "Freed of a normal museum relationship of wall-mounted works, the curving walls and the light from above enable the pieces on the floor to levitate."

A system of skylights and overhead lighting creates a brightly lit environment. Thick concrete beams span the ceiling, helping to diffuse the light, and these rest on top of the curving walls.

"Horizontal illumination puts the glass in silhouette and limits the patron's understanding of the form of the work itself; however, light from above does the opposite," explained Phifer.

"It honours the material so that the more light the object absorbs, the more it reveals the form, depth, and richness of the glass."

The five galleries vary in size and shape, but each one is focused on art and design works in glass from 1990 to the present, from artists such as Liza Lou, Roni Horn, Tony Cragg and Robert Rauschenberg.

One space is devoted entirely to pieces that are less than 25 years old, by artists including Studio Job, James Carpenter, and Stephen Burks, while another is solely dedicated to large-scale installations or special temporary projects. For the opening, Kiki Smith's 1996 work Constellation fills the space.

Around the outside of the galleries is a perimeter corridor referred to as "the porch". It offers additional display space, and features a 40-metre-long window facing out towards a new museum green.

For the exterior, large, almost seamless glass panels were chosen and a layer of pale silicone was slotted beneath the glass surface to create opacity. This allows the building to subtly reflect its surroundings – including the three other museum wings.

The first building was completed in 1951 by Wallace K Harrison, a partner at Harrison & Abramowitz.

This L-shaped structure was followed up in 1976 by an amorphous addition by Latvian-American architect Gunnar Birkerts, while the most recent addition is Smith-Miller + Hawkinson's glass and steel structure, which opened in 2001.

"It became immediately clear that our new addition must forge a deep connection with the existing museum buildings and serve as a central and clarifying structure on the Corning campus," said Phifer.

"The new gallery building had to speak to this context and the contemporary works it contained."

The architect was also tasked with adding a new 500-seat amphitheatre where visitors can observe live glassmaking demonstrations. This was added within the renovated Steuben Glass factory building. It features a mezzanine balcony, offering a 360-degree viewing experience.

The first two artists to work in the space – known as the Amphitheater Hot Shop – will be American sculptor Albert Paley and Swedish artist and designer Bertil Vallien.

"With the opening of the new wing, we are able to display and interpret contemporary art and design in glass in the same elegant and thoughtful way in which it is being produced," said Tina Oldknow, senior curator of modern and contemporary glass.

"They are innovators of new approaches, concepts, and techniques that push the known boundaries of the material – perhaps, most noticeably, of scale. These large sculptures and installations demanded a monumental space in which to be experienced."