Perforated metal panels create a semi-opaque surface around this elevated playground structure in Bordeaux, which contains slides, climbing nets and a trampoline (+ slideshow).

The playground was developed by BASE as part of a project to improve living conditions for the residents of a 1960s housing estate called Génicart, which is situated in the Lormont district in the east of the city.

The Lormont playground is intended as a compact and partially transparent object at the centre of an area entirely dedicated to children's games that gives a new purpose to an underused site.

"Through the project we plan to address some of the consequences of the housing estate rehabilitation initiated in the 1980s, such as the partitioning of the site, the more progressive transition from public to private as well as the reduction and ill use of community spaces," the architects explained. "All these aspects are contrary to the main principle of housing estates."

"We have paid special attention to the bottom of the buildings, which suffer from a lack of shops or from inadequate configurations with uninhabited housing, unusable piles, deserted associative premises and sensitive running-through hallways," they added.

Metal-clad boxes housing the main play equipment are enclosed by a timber framework, while perforations in the powder-coated sheet-metal cladding create moiré patterns across the surfaces.

Angled legs raise these volumes above the ground and reveal the bases of access ramps that ascend to the play area, as well as slides that drop down from different heights.

One of two towers that rises from the main play surface has a trampoline in its base and a staircase leading to the top of the longer slide, which descends through the surface of the main deck. 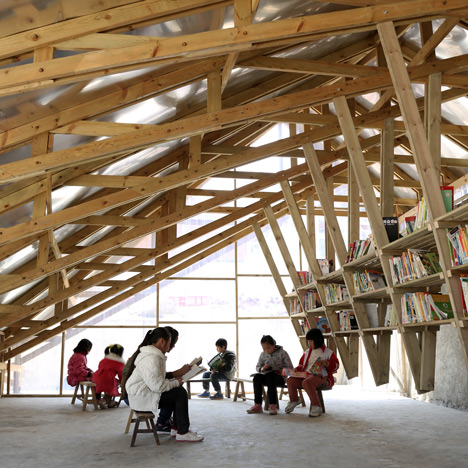 Parents can follow a staircase into the other tower, which contains a platform where they can socialise and observe children playing.

Openings in the decking contain netting that can be used for climbing or hanging on. Vertical sections of netting can be used as a way to clamber onto the decking.

"The structure plays with superposition," said the architects. "Horizontal and inclined nets useful for escalade or simply lying down are hidden under a terrace where parents can benefit from a great view both of their children playing and of their neighbourhood."

Benches are incorporated into the surface of the decking, while raised platforms around the perimeter of the playground provide additional seating and play areas.

A large opening at one end of the deck is covered in netting and forms a balcony with a horizontal opening in its cantilevered edge that provides a viewpoint.

Photography is by Karolina Samborska.